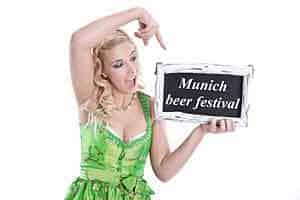 Most beer-loving travellers have Munich high on their must-do list for an autumn visit.

That’s when it’s Oktoberfest. Yes it is probably the best-known beer event in Europe and the whole world.

But the spring festival Starkbierzeit has crowds half as large, and beer twice as strong as the Oktoberfest.

If Oktoberfest seems a little too crazy for a first visit to the city, the Strong Beer Festival is a slightly more mellow introduction to Munich.

You can still dance on tables, sing rowdy drinking songs, admire the locals’ legs in “lederhosen”, and celebrate Bavarian culture.

And of course, you can drink a lot of lovely local beer.

Munich Strong Beer Festival is a bit of a local secret

For around three weeks in early spring, breweries all across Munich set up their beer halls.

This beer festival might be the city’s best-kept secret. It’s actually even older than Oktoberfest, started in the mid 1600s, by Munich’s Paulaner monks.

The crafty monks concocted a beer beverage to sustain them through the Lent fast, and called their pick-me-up ‘blessed father’s beer’ or ‘the holy oil of St. Francis’. Finally, they settled on ‘Salvator’ – Latin for saviour.

So what’s goes on at this festival?

Each brewery opens a marquee for merrymakers, just as they do during Oktoberfest.

Unlike the autumn festival, it’s not an all-day affair – the tents open at around 6 pm, so there’s plenty of time for sightseeing before you start ordering your first Stein.

Expect to leave before midnight – it’s a local celebration, not a wild party.

True Starkbier must be made within the Munich metropolitan area – the most popular brands come from four of the city’s main breweries, Paulaner, Löwenbräu, Augustiner and Unions.

Munich Strong Beer Festival is a celebration of all things Bavarian, not just a tribute to ale.

As with Oktoberfest, brash oompah bands fill the tents with the din of drinking songs, while waiters and waitresses put on traditional costume and carry up to ten Steins each.

The taste doesn’t hint at its potency.

It has a nutty taste, with flavours of toffee, caramel and cloves, and an ample helping of sugar.

Guidelines for “Starkbier” guarantee an alcohol content of at least 7.5%. Some reach 9%, making a potent brew to ward off the last of the cold winter weather.

A creamy butterscotch head settles on glowing amber beer. It’s the colour, along with the maltiness, that gives Starkbier the characteristics of what the Bavarians call ‘double bock’ beer.

Where is the Starkbier festival?

It’s the Paulaner Brewery at Nockherberg that’s the main venue for the festival.

There are also other smaller and bigger breweries celebrating the strong beer. Among them is the well known Löwenbräukeller.

Reserve a table by phone or online, and do it early, to be sure of getting seats with a good view of the entertainment. 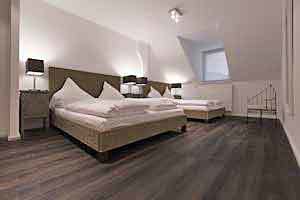 Stay in the city or close to the Paulaner ?

Lots of good hotels in the center and you can easily reach anything and the festival venue at Nockherberg by local transport.

Great for a group holiday

This festival is less publicized than Oktoberfest, so locals (and groups of smart travellers) can enjoy their beer among smaller crowds, and at lower prices.

In effect, you’re drinking up to four pints of ordinary European beer in one glass, so you’ll need some proper sustenance to keep you going.

A walking tour might clear the head and burn off some of those beer calories – choose one with food, and you’ll get to sample local speciality dishes too.

More things to do in Munich