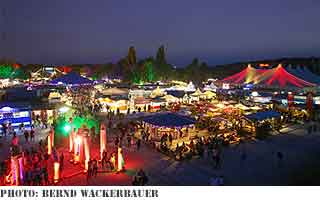 Theater performances, art exhibitions, live music from all over the world, and the colorful “Market of Ideas” – this is all about Tollwood Summer Festival.

At the concert stage, you will meet music legends, as well as newcomers from all over Germany and other countries of the world.

Handcrafts market and international gastronomy choice speak for themselves.

The festival’s motto is “Culture for all”, so 70% of all performances are free to entry.

A month-long celebration of music and theater – this is what Tollwood is!

First held in 1988, Tollwood takes place twice a year and is known as the festival “for humanity and environment”.

It promotes the ideas of waste reduction, organic living, and climate preservation.

With over 1.5 million visitors per year, it becomes a serious ecological and social project.

Tolerance, internationality, and open-mind spirit are the keystones of the event.

Of course, the entertainment program of the festival is vastly rich: from contemporary circus performances to cabaret shows and from comedy acts to children’s activities of all kind.

By the way, the Tollwood Winter Festival takes place on Theresienwiese from November until New Year’s Eve. 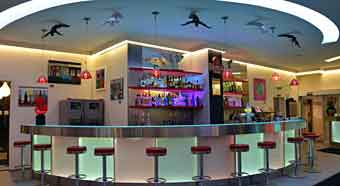 Arthotel Munich is centrally located and within walking distance of Munich central station.

Enjoy an extensive breakfast buffet in the art-filled breakfast room.

In the evenings, you can head to the “Bar Art” for drinks and snacks.

A popular hotel in a great location!

How to get to the festival area

The festival takes place in the Olympiapark in Munich.

The park was constructed for the 1972 Summer Olympic Games.

Situated in the Oberwiesenfeld neighborhood of the city, the area was mostly used as an airfield until 1939.

Today, it serves as a venue for numerous cultural, social, and religious events.

From Munich center you can use the U-Bahn.

Link to the route on Google maps here >>

The public transportation system of Munich consists of the urban rapid rail trains (S-Bahn), subway (U-Bahn), the tram, and buses.

It is fast, convenient, and easy to use.

There are multiple bike rental services available if you would like to explore the area on two wheels.

And of course, you can always use a taxi.

Prices here are regulated by the government and are reasonably low.

HOW TO GET TO MUNICH

Munich is a very big city and a huge transport hub.

Planes come here and leave in numerous directions in Europe and around the world.

The main airport is situated 30 kilometers away from the city.

The easiest way to get to the city is by a suburban train.

The central railway station of Munich is situated only five minutes away by foot from the city center.

Deutsche Bahn considers Munich as one of its main hubs.

The city has connections with most German cities, as well as many other European countries.

The international bus connection is also great, linking Munich with all neighboring countries and more.

The Central Bus Terminal is situated right next to the Central Railway Station, although you will need to walk for about 10-15 minutes, due to the railway tracks in the way.

More to do in Munich

More from Munich and Germany