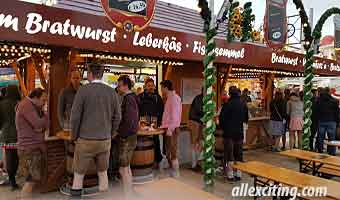 Munich has such great transport links, you can choose to stay just about anywhere in the city and still easily access the festival grounds.

Arthotel Munich is in an excellent area and from here you can easily walk to the Central Station and the Springfest site.

A non-smoking hotel with spacious sound-proofed rooms, the interior is filled with pop art.

If you’d like to book an apartment for your stay, then Aparthotel Adagio Muenchen City is well located for visiting the Munich Springfest.

Free WiFi, 24-hour reception and a fitness center where you can work off any festival food and drink accesses.

Munich has plenty more options available – explore them all and take your pick!

Held at Munich’s Theresienwiese – the same venue as the Oktoberfest – the festival grounds are easy to reach via public transport:

Subway:
U3 and U6 – Goethe Square or Poccistrasse
U4 and U5 – Theresienwiese or Schwanthalerhoehe

A fixture in Munich’s spring calendar, the Munich Springfest – Frühlingsfest München – has been running for over 50 years.

Affectionally known as “Octoberfest’s little sister”, the Springfest starts the festival season for which Munich is famous.

Running just over two weeks, it’s a chance to get out and enjoy all that the wonderful season of spring has to offer.

Fairground rides, live music and the atmospheric beer tents add together to bring you a festive spring event.

In true Bavarian fashion, Munich Springfest kicks off with a spectacular parade, along with “Boellerschuetzen” (shooting into the air with mini hand cannons).

Following the Munich Springfest kicks off in true Bavarian fashion with a spectacular parade where the traditionally-dressed vendors and brewers travel along the streets to the festival venue.

The breweries’ decorated horse-drawn carts are an amazing sight to behold as they move the beer barrels to the festival ground.

Be prepared for the loud sounds of the “Boellerschuetzen” (shooting into the air with mini hand cannons) which accompany the parade.

As they arrive at the beer tents, each beer tent band will perform a concert at the entrance.

Munich Springfest has plenty of great food and drink on offer.

Bavaria food is hearty and delicious and you’ll find all your favorites on offer: Bratwurst, knuckle of port, rolled porked roast, plus much more.

Sweet tooths are well catered for with traditional offerings such as gingerbread, roasted almonds, and toffee apples to name just a few.

And then of course there is the beer: Paulaner wheat beer, Augustiner Beer, and Spaten Fruehlingsfest Hell.

More things to do in Munich