Rich History and Culture, Flamenco, festivals and a vivid nightlife 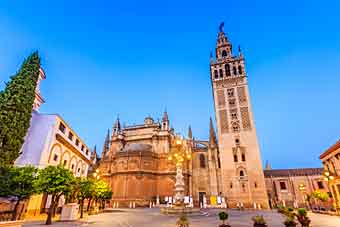 The capital of Andalusia, Seville is home to over 700 thousand citizens, which makes it the fourth largest city of Spain.

Three things, associated with Spain, were born in Seville: flamenco, tapas, and toros.

The city is culturally diverse with rich flamenco heritage.

In the 19th century, the city was already a popular European tourist destination, due to its beautiful architecture and rich culture.

Today, the city is buzzing with different festivals and vivid nightlife.

The tourism industry is flourishing.

Seville airport can handle 6 million passengers per year and the train station has a high speed train connection with Madrid.

Many improvements are done to the city’s infrastructure, which were made before the International Exposition of 1992.

WHAT TO SEE AND DO IN SEVILLE

Seville is known for its Moorish heritage, visible in colorful tiles, lobed arches of the palaces, and the iconic Giralda Tower.

Even if you are in Seville for just a couple of days, there are some must-visit places and must do experiences which you can’t avoid.

The UNESCO World Heritage Site and the largest cathedral in the world by volume.

This gigantic building is like a whole other world. 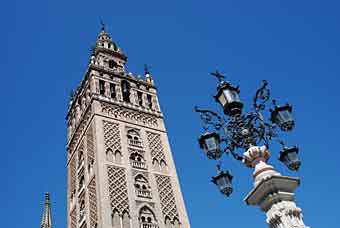 The most recognized site of the city, the Giralda bell tower is situated right next to the Cathedral.

Formerly, it was a minaret of the mosque, which stood at the spot of the cathedral.

The unusual thing about the tower is that there are 34 ramps inside, instead of stairways.

It was made, so the Muezzin could ride his horse up, instead of walking.

There are archaeological exhibitions all the way up, so you won’t get bored, while climbing to the top of the tower, which you should do for a magnificent view and great photo opportunities. 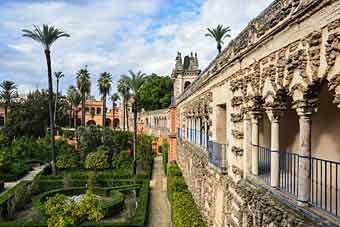 The Alcázar of Seville

Listed among the UNESCO World Heritage Sites, this marvelous palace complex is still in use by the royal family of Spain.

However, the chambers,the staterooms, and the halls of the upper level are accessible to public.

If you are a museum enthusiast or just want to avoid the hot Spanish sun, consider visiting one or several of these museums: 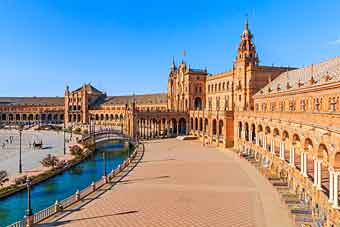 Built in 1928 for the Ibero-American exhibition of 1929, the square was meant to celebrate the discovery of America by Spanish conquistadors.

The plaza was designed in a half-circle shape, in order to face the river and greet the arrival of the American ships.

Here you can admire the beautiful bridges, which symbolize 4 ancient kingdoms of Spain, canals, fountains, arcades, and 48 azulejos benches, which represent Spanish provinces.

On the right side of the square, there are stairs, which lead to the terrace with a great panoramic view.

The largest green space in the center of Seville, the famous Maria Luisa Park is located right in front of Plaza de Espana.

It’s a perfect place to escape the crowd and the heat of the Spanish summer day!

Just what you need after a day of sightseeing, isn’t it?

At the southern end of the park you’ll find the Museum of Popular Arts and Traditions and Seville Archeological Museum.

Both worth a visit if you are interested in the history and culture of the city.

The first one has a great collection of traditional Andalusian clothes, while the latter boasts a collection of artifacts from the Roman period of Seville. 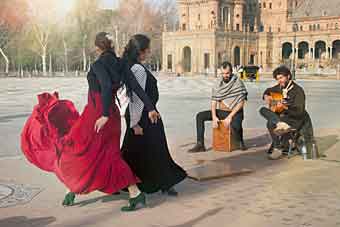 All year round, in the evening, performances are held throughout the city.

Tablaos, by the way, are places, where flamenco shows are combined with live music and great food.

Narrow streets and alleys of the center of Seville are spotted with tapas bars, each one with its own specialties.

Festivals in Seville and nearby

How to get to Seville

Seville International Airport is situated within a 25-minute ride from the city center.

You can take a taxi or use the bus service.

However, if you fly discount airlines (such as Ryanair), they often land at La Parra International Airport, situated 10 km away from Jerez de la Frontera, on the way to Seville.

The connection between Jerez de la Frontera and Seville is very good.

You can get to Seville by bus, by train, take a taxi, or rent a car.

Trains connect Seville with both large cities, such as Madrid or Barcelona, and small towns of Andalusia, such as Cordoba.

The railway station is situated at the eastern edge of the city and is easily accessible by public transport and by taxi.

Bus service in Spain is punctual, comfortable, and while it’s just a bit slower than train connection, it’s often much cheaper.

Regular bus routes run between Seville and large cities, as well as small towns of the region.

Renting a car is a great option to travel between the Spanish cities.

However, within the city, public transportation is proven to be more convenient.

Seville has a great public transportation system, presented by metro, buses, and trams.

Taxi service is also quite common. In addition, Seville is a very bicycle-
friendly city.

Most major sites are situated within walking distance and are easily accessible by foot.

You can find many good hotels to choose from in Seville.
Here are a couple of the best with good reviews from their visitors 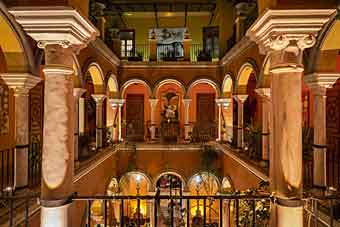 Hotel Casa del Poeta – Located in the very heart of Seville, only 250 meters away from Seville Cathedral and the iconic Giralda Tower.

This 4-star hotel has a 9.5-rating on Booking.Com and has the some of the best reviews in Seville.

All rooms are soundproofed, include a satellite TV, a minibar, a private bathroom, and free WiFi connection.

The hotel is wheelchair accessible, has a bar, provides airport transfers, and serves a great breakfast.

Friendly staff is ready to organise all kinds of entertainments, including cooking classes, bike and walking tours, excursions and concert tickets.

There is a wide variety of bars and restaurants situated nearby, most of them serving tapas.

Hotel Casa del Poeta will be a great choice to enjoy the historic atmosphere and cultural buzz of the Old Town.

Guided tours and more things to do in Seville