When travelling south from Alicante in the direction of Cartagena you will find that after 20 kilometres the landscape changes dramatically.

You are leaving the Mediterranean and its beaches behind and enter the region of the Mar Menor, which is Europe´s biggest salt lake.

A massive lagoon, separated from the Mediterranean by a 24 kilometres long sand bank, known as La Manga. 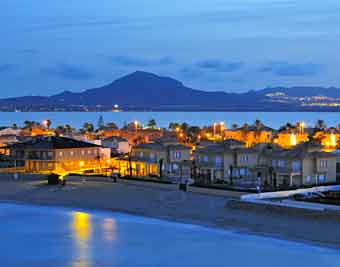 The first town you come to is San Pedro del Pinatar, a very popular holiday resort with several attractions.

Most famous are the mud baths of Lo Pagan to which healing properties are attributed.

In the summer, people have fun playing around on the beach, covering each other with the mud, letting it dry and washing it off with a refreshing swim in the shallow salt rich waters.

A bit like the Dead Sea in Europe although unlike in Jordan or Israel you cannot lie on your back and read the paper supported only by the strong salt content of the water.

The huge lagoon has its own climate, flora and fauna and the wetlands are a paradise for hikers and bird watchers.

Many species nest and live here which cannot be found anywhere else in Spain.

San Pedro has a long promenade where you can walk along the wide beach until you reach the port with many fishing and sports boats. 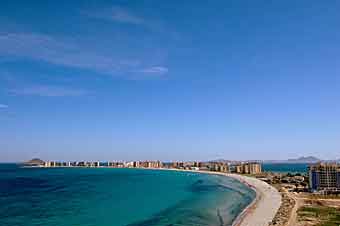 In the distance you can see La Manga and its high rises and more boats anchored off shore.

All that walking, swimming, hiking and mud slinging will make you hungry and here is an insider tip for a fantastic restaurant where you can pile all the calories back on which you might have lost during the day.

La Casa del Reloj is situated at the entrance to San Pedro and is a historical building.

Constructed as the summer residence of the Servet family between 1888 and 1895.

The building impressed with a variety of styles and a mixture of architectonic elements as was very much the fashion among the wealthy at the time.

Surrounded by a garden and an alley with palm trees which leads up to the entrance, you enter a world of lavish decorations, chandeliers, paintings and sculptures.

The first President of the first Spanish republic, Emilio Castelar died here in 1899 and a ceramic plaque next to the entrance commemorates the fact.

The chef offers a great variety of starters and main courses not forgetting to include a few traditional dishes as prepared by past generations and following original recipes.

Smaller and bigger dining rooms, salons and a glamorous bar round out La Casa del Reloj, so called because of the clock embedded in one of the turrets.