Rome certainly lives up to its nickname, the Eternal City.

Founded over two and a half thousand years ago – so it’s not quite been eternity, but this is one of the oldest cities in Europe.

Synonymous with the Romans and their Colosseum, but also renowned for some of its not so ancient architecture.

Such as St Peter’s Basilica, the capital of Italy is a vibrant and endearing place to visit, any time of the year.

It’s the capital of Italy and has the largest airport in the country.

Rome Fiumicino Airport is about 35 kilometers from the historic center.

There’s a major motorway linking the two together if you’re planning to rent a car and drive, or leave the driving up to someone who knows the roads better and take a taxi.

Buses are also another option and they vary in price and schedule.

There are also trains that go into the city, arriving at the central train station, named Termini.

Trains are fairly fast but if you’re travelling with two or more other people a taxi would be more affordable.

As you’d expect, most of the major European airlines cover flights into Rome including Air France, Alitalia, British Airways, KLM, Lufthansa, Scandinavian Airlines, and Turkish Airlines, as well as airlines from Africa, North America, Asia, and the Middle East.

You can fly with Cathay Pacific from Hong Kong for example, or from Abu Dhabi, Accra, Beirut, Tel Aviv, and Tripoli, among others, with Alitalia.

American Airlines, Air Canada, and Delta Air Lines are among those offering flights from North America.

If you’re traveling around Europe on a luxury yacht you can now include Rome among your list of destinations, thanks to a new marina, Porto di Roma, which is able to handle medium to large sized yachts.

From there you can travel the 20 kilometers into the city by train or taxi.

Right in the heart of the city getting around by foot is the best way as you’ll get to see more of the city and it’s not a great distance from one landmark to another.

Taxis are an option but they’re the most expensive way to get from A to B, however, driving yourself around Rome is not recommended unless you’re familiar with the city and Italian driving.

When travelling a little further bus, tram, and metro are the best options.

There are tickets you can buy that are valid on all three types of transport, or you can consider buying the Roma Pass which covers you for transport and gives admission and discounted admission to museums, archaeological sites, and cultural events.

Rome is going to be busy no matter what time of year you visit.

The city itself is home to around 2.8 million people while this number climbs to more than 4 million in the metro area.

Of course, this wonderful city also attracts millions of visitors every year – it is the most popular tourist destination in Italy and one of the top cities to visit in Europe, attracting tourists from all over the world.

Summer is the peak time for tourists to visit, and obviously it can be very busy at this time, however, there is an exception.

During August you will actually find that many businesses, restaurants and stores are closed for a two week period while they take their own holidays.

Romans like to get out of the city at the hottest time of year when the temperatures can become a little too hot.

The downside if you visit in August is that places will be closed, but on the plus side there are few fewer tourists and locals around so it can be a very pleasant time of year to visit.

The average high will be around 30C, as it will be in July also, but if you prefer it cooler plan your visit for May or June when average highs are in the low to mid 20’s C.

Within Rome’s central districts there are countless places to stay.

If you’re staying within the center it’s fairly easy to get from one attraction to the next.

Therefore unless you have a burning desire to be right near the Colosseum, or the Spanish Steps, it doesn’t matter too much exactly where you stay.

The Spanish Steps, by the way, are in the North Centre district, while the Colosseum is easy to find in the Colosseo district.

In total, Booking.com has over 2,000 properties listed within Rome and its immediate surroundings, so you’ll certainly never be short of a place to stay.

If you’re looking for hotels at the luxury end there are many 4 and 5 star hotels to choose from. 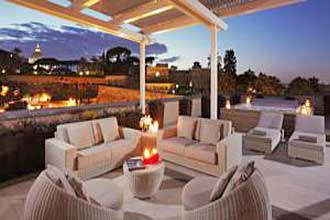 Gran Melia is always highly rated among guests and rooms feature views of the Vatican, Castel Sant’Angelo or the hotel’s own serene gardens. 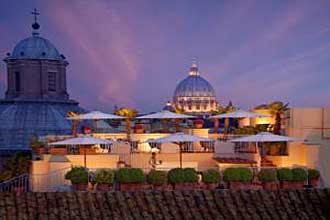 Another 5 star hotel is Hotel Raphael – Relais & Chateaux which is renowned for its marvelous roof terrace with spectacular views over the city.

The Pantheon is just a 5 minute walk from here. 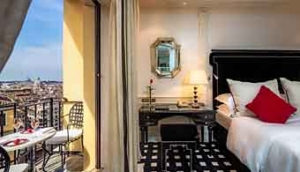 If you want to be right next to the Spanish Steps, choose the famous Hotel Hassler Roma; one of the best known hotels in the city.

It is set at the top of the Spanish Steps and rooms are classically furnished in a style you’d expect for Rome! 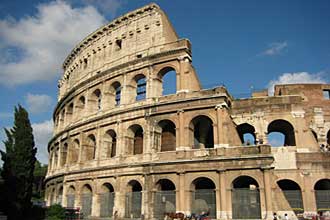 Rome has so much to see and it would take weeks to see it all.

At the Rome Attraction page we mention the most important things to see during your stay.

Things to do in Rome