Cartagena, in Spain, is worth visiting at any time of year.

Especially during the second half of September when the Festival of Carthaginians and Romans is held in town.

You feel welcome when you arrive to this beautiful city.

It has a great atmosphere, wonderful architecture and smiling people.

And of course it has this charming festival Carthaginians and Romans in the end of September.

This culture festival is by our opinion among the top 3 visited so far.

The Festival Romans and Carthaginians

Cartagena is proud of its ancient past and its people are the engine of this annual festival that is unique in Spain.

Otherwise peaceful citizens of Cartagena are dressed up in historical costumes and weapons to reenact the fierce battle.

A colorful and quite noisy spectacle which attracts thousands of visitors from Spain and abroad.

In 10 days in late September, more than four thousand Carthaginians are involved in these games and festivities.

During the festival you can see games that shows all the heroic events that occurred during the period from about AD 227 to 209 BC,

The shows creates a magical atmosphere in the cozy resort of Cartagena.

Wedding and Imilce Hannibal, the oracle of Tanit, the march of Hannibal to Rome, the landing of the Roman fleet, parades of troops and legions and fight to conquer Qart-Hadast.

You can participate in several different activities during the festival.

Make a visit to the craft market and, not least, enjoy the many food specialties the Carthaginians offers at the festival area and in they’re bars and restaurants.

Beside all the great and nice Roman themed places to eat at the festival area, you will find many cozy bars and cafes along Calle Mayor with good drinks and tapas. 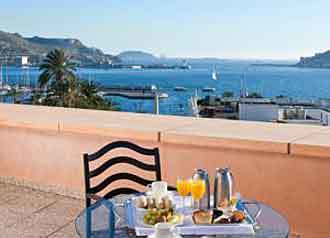 You can find some good hotels to choose from in Cartagena.

A popular hotel in the historic center is NH Hotel, a great 4 star hotel and the roman theater is only 200 meters away.

As you see on the picture above, it offers rooms with great sea view.

Pictures from the festival

More about Cartagena in Spain

Cartagena is located on the Mediterranean in the southeast of Spain.

When arriving you soon see that you’ve come to a place that has seen its fair share of battles, conquests and different civilizations over more than 2000 years.

You first notice the massive rampart which runs along a good part of the port and nearly encircles the old part of town.

Built by King Charles III in around 1728 when Cartagena became the headquarters of the Arsenal and Spanish marine department.

It´s the last of many fortifications to protect the city’s natural and strategically important harbor.

That was the main reason why Romans, Vandals, Visigoths, Byzantines and Arabs were so eager to rule over the city.

Founded in 227 BC by the Carthaginian Hasdrubal the Fair, Cartagena lived its heyday during the Roman Empire.

It was Scipio Africanus who in 209 BC conquered the city and the port and renamed it Carthago Nova.

He managed to do so by assault and the battle is one of several which comprise the 2nd Punic War. 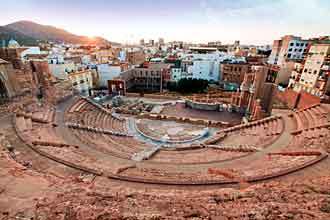 Along the port and past you find several landmarks from different times and cultures.

Turning from the port towards the pedestrian zone of Calle Mayor you find the Roman Theatre.

It is the second largest on the Iberian peninsula and built in the 1st century BC.

When Hasdrubal founded Cartago, the first rampart was built in defense of city and port.

The remains of the Punic wall can be seen in a museum a few steps from the main bus terminal.

During excavation of the Punic wall the archaeologists happened up a Christian crypt with burial niches for monks. 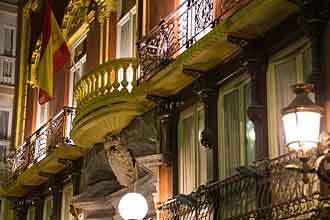 Along Calle Mayor you can admire beautiful art deco buildings and facades from the 19th and early 20th century when Cartagena prospered from trade and mining.

The Casino, Grand Hotel (today a bank) or Casa Aguirre which houses the museum of Modern Art are just a few.

An overview of Cartagena´s importance as a naval center can best be obtained by a boat trip around the harbor;

Lighthouses, forts on both sides of the entrance and a view of the Museo Naval and the National Museum of Underwater Archaeology.

Countless sites await to be visited in Cartagena, and doing so during the festival adds a special flavor to the experience of Cartagena´s past and present.

Other Festivals and more from Spain