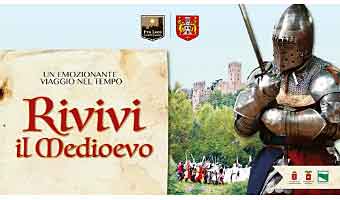 Plant yourself for two days right in the midst of the Middle Ages!

You can prance with knights, maidens and experience an old-style war in the service of lords.

All in confines of a real medieval village, Castell’Arquato  – located in the Piacenza region south-west of Milan – with castle battlements.

Merchants will also be on hand to entice you with fabulous goods while children can learn some medieval games.

Dishes from the Piacenza region will sate your hunger as you go back in time wandering an encampment surrounded by swords and armor, warmed by night-time bonfires.

This two-day outdoor show immerses you in all things Middle Ages.

From re-enactments, to merchandise, costumed actors, dancing, music, events from ages past and food that recalls Medieval times.

If you like to be in costume, you can also join the parade and walk among other participants in their fanciful outfits.

You get a unique street-level 360-degree experience at this charming festival, vibrating with the atmosphere of a time gone by.

This is a popular festival that has attracted about 10,000 people annually with more than 50 stalls offering goods and tasty treats.

Castell’Arquato is located on the foothills of the Val D’Arda.

The medieval village is perched along the hill and just 30 kim from the capital Piacenza.

Straddling the left bank of the Arda river, the stone village has been almost untouched over the centuries.

Walk the Viale delle Rimembranze and come upon the Farnesiano Tower which neighbours the Palazzo del Duca. 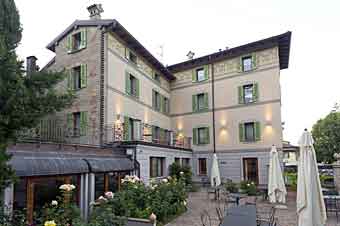 The hotel is in the village CastellʼArquato, where the festival takes place.

Beautiful and popular with good reviews from its guests.

The hotel is in the centre of Piacenza, 30 km from CastellʼArquato.

It has a supervised car park and a 24-hour reception.