Paris – The city of light

Paris known the world over for its wonderful landmarks, cuisine, culture and lively ambiance.

The capital of France and home to around 10,5 million people.

It’s ranked at the top of tourist charts as being one of the most visited places in the world, and if you haven’t been here, it is a destination that most certainly should be on your bucket list.

Paris Metro Once you’ve arrived you’ll probably be using the Metro to get around most of the city.

It’s a very extensive system that was first opened in 1900 and covers 214 kilometres (133 miles), most of which is underground.

There are 303 stations in total and 16 lines, and you will always know where a station is thanks to the brightly coloured Metro signs with their Art Nouveau styling.

But this is such a beautiful city that it seems a shame to be stuck underground not seeing it!

Walking is very popular, and it’s the best way to experience the real Paris.

It is a very walkable city after all, and you could walk from one end to the other in a couple of hours if you weren’t stopping everywhere!

Cycling is another good way to get around and there are many miles of dedicated bicycling paths to use.

The good thing is that these are safe, with barriers in place to stop vehicle traffic from entering the bike lanes.

An easy way to discover Paris is to use the Velib bike sharing system.

The problem with being such a popular city is that it’s also a busy city.

Not only are there over ten million people living in the city itself, there are hundreds of thousands of people in the suburbs who commute in to work every day; add the millions of tourists into the mix and there’s never really a quiet time of year to visit Paris.

Lines for attractions can be extremely long during the summer so if you want to achieve anything in a day you have to make a very early start.

Summers are the best time to visit for the nicest weather though. July and August are the months with the most sunshine and the average high temperature in both these months is around 25C.

Occasionally the city does experience intense heat waves when it can become very unpleasant, and you should take an umbrella or rain jacket with you so that summer showers don’t spoil your fun.

Paris will be a little quieter in spring and autumn.
The weather can be very pleasant at this time of year with mild daytime temperatures and cooler nights, and while winters are not harsh, it will be cool and damp for sightseeing.

It’s so much to see in this city, and you can read about the main attractions at the Attractions Page

One thing not to miss …

We just have to mention one of the most fun things to see when you’re here.

The number one show in France and maybe even the whole of Europe; Moulin Rouge

It has gone on for over 110 years now and is so popular that tickets sells out months in advance. Don’t miss your chance to see this historic show !

It is very easy with the city’s excellent air and rail links to Europe and the rest of the world.

There are two major airports serving the metropolis: Orly Airport, and Charles de Gaulle Airport, the latter of which is one of the busiest in the world.

Paris Orly Airport is 13 kilometers (8 miles) south of the city and was originally the main airport.

Still today it is the busiest in France for domestic air traffic and the second busiest overall in the country.

So there are many flights to other parts of France from Orly, but also from around the world: North Africa, East Europe, the USA, and most of Western Europe is covered though you’ll find that Charles de Gaulle is served by bigger airlines if you want additional choice for flight times and days.

Charles de Gaulle is a little further out (25km/16mi) but it’s well connected to the center of the city via the RER train, and is easy to get to by car.

Hotels and Where to Stay

Paris is a large city with many popular areas and attractions spread all over its reaches.

There are twenty ‘arrondissement’ in total with the 1st being right in the heart of the city and the others spiraling out from there in a clockwise direction.

So technically if you want to be in the center of the city look for a hotel in the 1st arrondissement, though many others will be great places to stay too.

For example Champs-Elysees runs through the 8th arrondissement, so it’s a good idea to use the Metro, which is an excellent way to get around the city, so you can stay a little further out if preferred.

If you want a luxurious and beautiful property, then you won’t be disappointed, there are many to choose from; 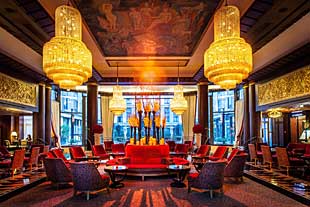 The elegant and classy Hotel du Louvre which, as the name suggests, overlooks the spectacular Louvre Museum. 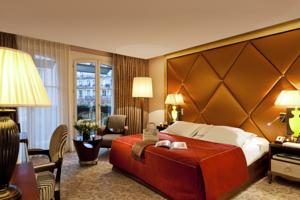 In the center the majority of hotels will be set within historic buildings and while the exteriors may all have similarities you’ll find very different interiors, from modern and cosmopolitan, to ethnic, and everything in between!

Other places worth seeing

Things to do in Paris