The legendary Melt Festival has been entertaining legions of music fans for two decades.

At the awesome Sleepless Floor  you can dance to electronic beats nonstop 24 hour a day.

Back in 1997, 1,000 festival partiers gathered at another town, Velten, at the birth of Melt! Festival.

This German techno and rave festival paved the road for a super-charged gathering of musicians and artists from across the globe.

In 2008, the festival was extended to three days with Björk taking the stage on Melt’s first ever festival Sunday.

In 2016, the site was expanded with an open-air cinema as well as a ‘Forest‘ equipped with a treehouse, hammocks and of course, a dance floor.

Ferropolis is about an hour southwest of Berlin.

Organizers recommend you to take the train to Dessau, Gräfenhainichen or Wittenberg.

From there, they have a shuttle service which takes you to the festival grounds. 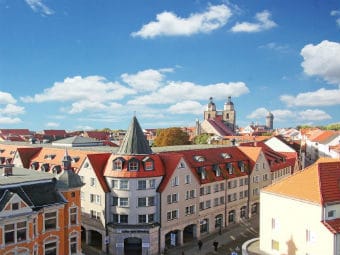 This 3-star hotel in the centre offers a sauna with rooftop terrace and free Wi-Fi in its public areas.

It is a 15-minute walk from the main train station.

Most rooms offer views of St. Mary’s Church, where Martin Luther (he of the Reformation) used to preach.