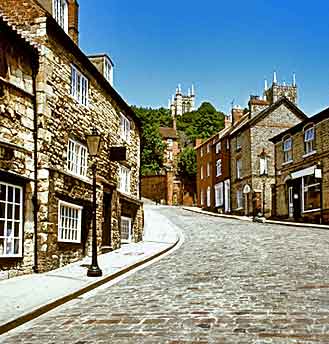 Lincoln, in the East Midlands of England, provides visitors with examples from the history of England and combines this with fine modern examples of architecture and culture.

Originally an Iron Age settlement, the Romans developed the area in a gap through higher land ( the Lincoln Edge) made by the River Witham.

After the Norman Conquest, William, Duke of Normandy, fortified the area with the construction of Lincoln Castle in 1068, followed by Lincoln Cathedral in 1072, on the site of the Roman settlement.

Lincoln is a city of two parts.

The Lower area is around the river and waterfront which contains the newer part of the city, whilst the higher area contains the Castle and Cathedral.

Connecting the two parts is Steep Hill, a pedestrian street which rises over 50 metres to the historic area.

It is steep and not suitable for persons with health or mobility problems.

For those who do not like the steep walk, there is the Walk and Ride bus shuttle service from the High Street ( in the lower area).

It loops around Steep Hill taking visitors to the Cathedral and Castle area and back.

A great attraction and one of the oldest traditional Christmas market in the UK.

Located in the historic area with the Castle and Cathedral, it gives a magical old history feeling.

It has a German style and usually opens on the first Thursday of December and goes on 4 days.

During those 4 days it attracts over 200,000 visitors, from across Europe, wishing to buy traditional gifts from over 350 stalls.

Lincoln Christmas market, combined with the towns many historic attractions and examples from the history and culture of England, makes this to an exciting visit.

If you wish to stay in Lincoln during this weekend it’s important to book early in advance, as last minute accommodation is difficult to find. 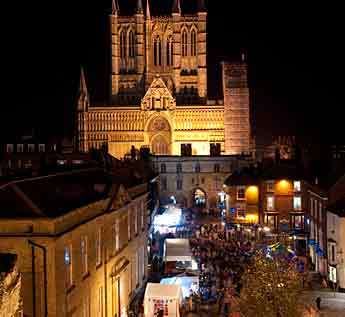 Other things to see and do

Sightseeing bus tour. You can buy day tickets from the visitors Information Centre on Castle Hill or on the bus.

Lincoln is so vibrant it is possible to visit at any time of the year and still find attractions.

Farmers’ markets and Antique fairs are held monthly  in both the Lower and Upper areas.

The Brayford Waterfront in the Lower city is vibrant with modern hotels, bars and restaurants.

From this area boat tours of the area can be taken.

In the Upper area are the more traditional hotels and guest houses, which attract large numbers of tourists because of their position beside the Cathedral and Castle.

There are also many museums and galleries within the city.

Museum of Lincolnshire Life in the Cathedral Quarter provides an insight of life in the area during the last 3 centuries.

It also has numerous exhibitions during the year. 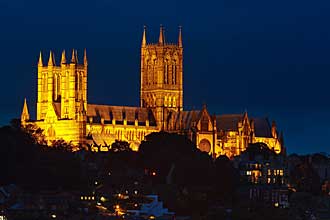 The Cathedral was once the highest man-made building in the world, higher than the Great Pyramids of Egypt, but the steeples which made it so have long since been removed.

With its fine Gothic style the present building has tours Monday to Friday of the floor and roof.

At various times during the summer there are also Tower tours. It is recommended that you pre book your tour which is free, although you have to pay the entrance fee for the cathedral.

The walled Castle area contains within its area the former Georgian/ Victorian prison, a building which is well worth a visit.

In particular the chapel where you can see the wooden partitions which restricted prisoners from seeing other inmates and allowing them only to view the priest performing the service. 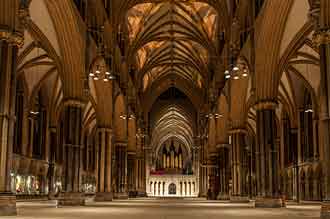 Free guided tours are available each day with guides from the “Friends of Lincoln Castle” giving their services free.

These tours around the prison and on the Castle Walls last about one hour.

History is mixed with the present as Lincoln Crown Court still operates from inside the castle walls.

At times during the year the grounds inside the walls are used for various attractions, examples being falconry displays and medieval jousting.

During excavation work a 1,000 year old stone coffin was discovered with a skeleton inside which is undergoing carbon data testing.

The castle and cathedral are musts for your visit to Lincoln, both having guided tours available. 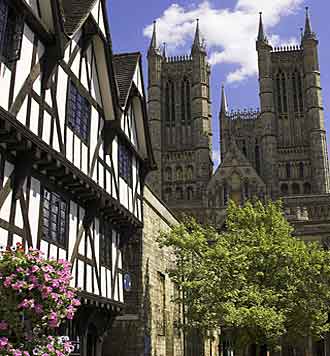 There is a great five star hotel in town; Pemberton House.

It’s the nice white house on the image above, situated near the beautiful Cathedral.

This house is a Grade II listed Tudor building (Statutory List of Buildings of Special Architectural or Historic Interest). 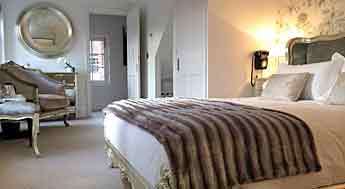 Hotel with one of the best vistor reviews

The Rest Hotel has got some of the highest score.

Beside those hotels, you have over 30 more options with B&B, guesthouses and 2 – 4 star hotels  available.