Tenerife and the beach Las Teresitas 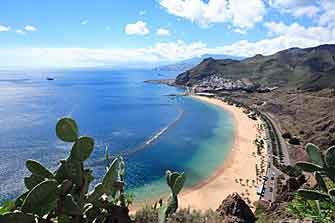 Tenerife, the biggest of the Canary Islands, is rather notorious for its black beaches.

Don´t get the wrong idea, that doesn´t mean the beaches are dirty.

Quite the opposite is true.

The black sand is the result of the island´s volcanic origin and the emissions of the many volcanoes.

Pico de Teide is the biggest.

With 3718 meters it is the highest mountain in Spain.

The black sand, which is very fine, is an interesting sight, particularly if it is surrounded by wild rock formations as for instance Los Gigantes in the south of the island.

It is, however, not to everybody´s taste to put their feet into black sand, interspersed more often than not with pebbles.

If you are an enthusiast of white beaches should you then bypass Tenerife?

By no means, because as I discovered on my last visit to the island, Tenerife does have a pristine white beach too.

Not in the more touristy south but in the northeast. Close to the capital, Santa Cruz de Tenerife, you will find Las Teresitas.

Miles of white sand, protected by break waters and therefore a very soft access to the water, the beach is a favorite weekend destination for the people of Santa Cruz.

Easily reached by car with ample parking facilities or even 20 minutes by local bus on a scenic ride along the coast.

Las Teresitas offers changing rooms, showers, umbrellas and sun loungers, bars and restaurants, in short, everything you need for an enjoyable day on the beach. 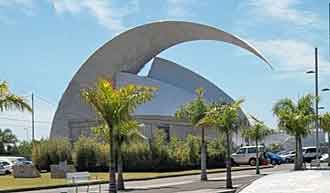 An added bonus is the proximity of cosmopolitan Santa Cruz.

One of the main attractions is the combination of ultra modern architecture like the ´winged ´auditorium and historical buildings.

Castles, parks, churches and museums offer something for anybody´s taste.

The marina is full of luxury yachts and speedboats and the concessionaries who would only be too happy to sell them to you.

The Santa Cruzians are an elegant people which is not only reflected in the way they dress but also in the great number of designer boutiques in Calle El Castillo.

No Spanish designer of international fame who doesn´t have his or her own boutique and if not, their brand can be found in upmarket department store El Corte Ingles.

Bars , ice cream parlors and restaurants complete the picture. Do not miss to try a Tenerife specialty: the black potato.

It has black or deep purple skin and egg yolk yellow meat and is cooked in seawater.

The history behind is that the potato was first introduced to Europe in Tenerife by the returning conquerors and some plants were left there.

Tenerife happened to be the only place in Europe where the original potato, as found and eaten 7000 years ago in Peru and Columbia, grew unchanged and unaltered.

The potatoes are still cultivated in Tenerife and, as a delicacy, cost nearly 10 times as much as their run of the mill cousins. 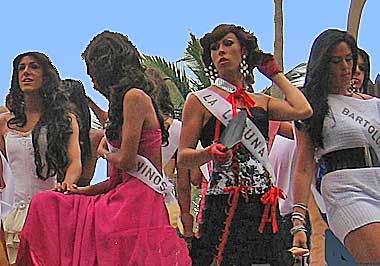 The big Tenerife Festival and Carnival

If you want some real fun, party and action, you have to visit during the yearly carnival here on Tenerife.

Read more about it at the Tenerife Carnival Page >> 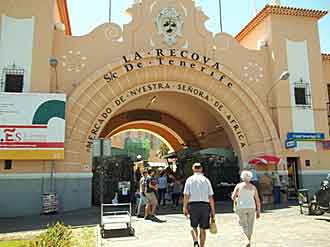 The Central Market in Santa Cruz

If you are lucky you will find some in the picturesque Central Market, El Mercado de Nuestra Senora de Africa.

Apart from fruit and vegetable the market stands out because of the great variety of plants and flowers that are on offer. A joy for eye and nose.

Spending a beach holiday in Santa Cruz has the advantage of a wonderful city, the possibility to go on excursions to the Orotava Valley or the Nature Reserve of the Teide and at same time avoiding the tourist traps of the more popular south. 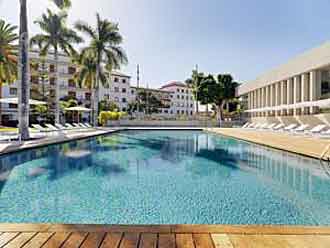 There is one great 5 star hotel in Santa Cruz. Iberostar Grand Hotel Mencey This is also one of the hotels with best score from visitors reviews in town.

Over 20 more options with B&B, guesthouses, villas and 2 – 4 star hotels are also awailable.

Things to do on Tenerife

Tours and things to do