La Tomatina is a food fight festival held on the last Wednesday of August each year in the town of Bunol near to Valencia in Spain.

This legendary festival is a smashing affair – literally.

The idea: thousands of people gather in the town square to hurl as many tomatoes as they can at each other!

Lasting only one hour, it’s a messy fun.

If you’re interested, there is a pre-party the day before and an after-party as well.

The origin story of the festival started on the last Wednesday of  August 1945 as a few young people were in the main square watching a parade.

They wanted to join in and interrupted the parade, causing one of the participants to fall.

This angered the participant and the crowd. There was a vegetable stand nearby and soon a tomato fight ensued.

Next year, the same boys decided to follow up but brought their own tomatoes — a tradition was born.

The tradition did have problems when officials banned the tomato throwing in the 1950s.

In protest, a tomato “burial” ceremony was held in 1957 accompanied by a funeral procession and band.

It got media coverage so, officials relented and allowed La Tomatina to return.

Old clothes or something you are willing to throw away after.

Shoes with good grip so you don’t slip so much (avoid flip-flops!) and goggles are great because your eyes will hurt from tomato acid.

Hotels: Overview of all hotels in Buñol 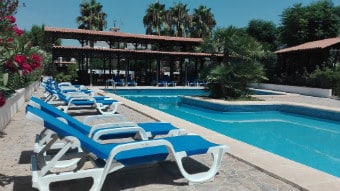 This traditional Spanish hotel is about a 15-minutes drive from the town and 20 minutes from the larger metropolis of Valencia.

There’s free parking along with a children’s play area.

Things to do in Valencia