Probably the most fun day in The Netherlands; Kings Day 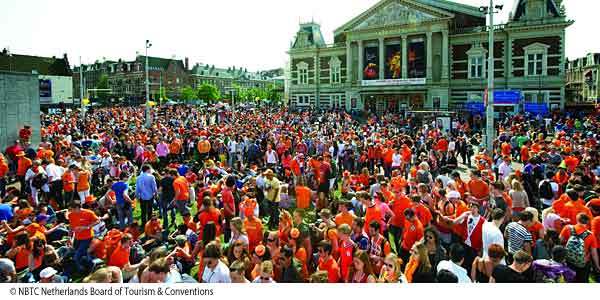 The Dutch love a good party and not many Dutch people will let the opportunity to celebrating Kings Day go by unnoticed.

It is celebrated in every little village in the country but the parties in the main cities are something really special.

After 3 generations of Queens the Dutch now have a King and will have to get used to celebrate King’s Day instead of Queens Day.

The celebration is held on April 27 ; the birthday of the Dutch King.

King’s Day in Amsterdam will bring approximately seven hundred thousand people to the city on this special day.

Each of them wearing some kind of orange; Orange t-shirts, tutu’s, wigs or painted faces in red, white and blue.

When you arrive in the city by train you do not have to fear that you will lose your way, just follow the crowd and take your time to take in all the weird and wonderful activities.

In Amsterdam the party starts on King’s Day Eve.

Pubs and cafés can apply for a license to sell low alcoholic drinks (lager, beer and wine) from beer tents in the street near their establishments.

Bars can set up a podium with speakers to perform live music to entertain the party goers between 19.00 and 1am on King’s Day Eve.

Watch street theatre or someone juggling balls. Have a try on a wonky bike and win a prize if you make it to the other end.

Stop for a snack and a drink; watch a concert on one of the squares.

There will be free concerts and music all over the city centre.

When the Dutch have a drink they like to snack as well.

Burgers, Vietnamese rolls and snack’s originating from the former colonies of the Netherlands are widely available.

If you have a sweet tooth you might like to try typically Dutch syrup waffles or buy a candy rock. 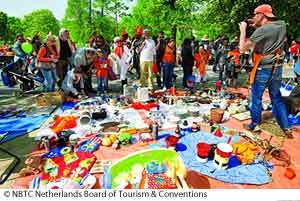 Cities such as Amsterdam, Utrecht and The Hague are converted into massive flea markets, where children and adults alike can sell their used goods without a permit and without the need to pay tax.

If you are planning to participate in the flea market on the actual King’s Day you might want to arrive early to get a good spot, and King’s Day Eve is designed to keep the spirits high.

Where: Amsterdam, all cities and most villages in The Netherlands 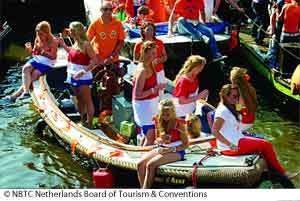 Party on the Canals!

You will find though, that not every party goer walks through the streets. Boats and floats full of party goers will sail the canals. 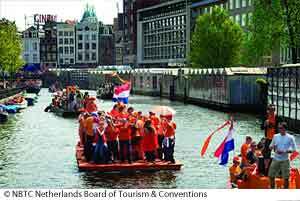 Many boats of all size and shapes with their crew dressed in orange, either hooting party trumpets or having a proper brass band on board.

In Amsterdam highlight places to visit are Rembrandt’s Square, Leidse Square and possibly Vondel Park where children sell their old toys or play a musical instrument.

Here you might also find some of the traditional orange iced custard slices which are only sold around this date.

On April 27 you can join one of all Kings Day parties in Amsterdam.

Lovers of techno, big-room house and hardstyle, will have a great celebration here, all with the luminous orange backdrop of a country in full party mode.

You can enter for free to the party at NDSM Vrijhaven King’s Day with Dj’s, live music, food and drinks.

You can check out more about the party here >>

For a more family friendly celebration you can check out the Bredeweg Festival.

It is of course important to book well in advance for Kings Day and especially in Amsterdam and other larger cities.

More things to do in Amsterdam

More from the Netherlands