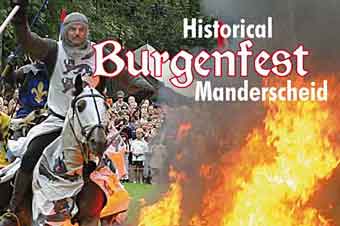 Manderscheid in Germany once again bringing the Middle Ages back to life with the fabulously historic annual Burgenfest on the last weekend of August.

“Burgenfest” festival takes place around the two Castles of Manderscheid.

Upper castle was built around 973, and is the oldest in the Eifel region.

The lower was first recorded around 1133.

Both castles were owned by opposing sides who remained enemies for many years so the region has seen many a battle.

The castles are spectacularly perched on a hillside with views over the lush volcanic Eifel landscape.

The Lion Knights will transform the field to Medieval times with jousting tournaments,sword fights, and bow and arrow demonstrations.

Throughout the castle grounds, singers, musicians, jugglers and fire-eaters will be continually entertaining and delighting the crowd.

A real highlight of the festival is the historical artisan market where blacksmiths, lantern craftsmen, and flower arrangers, among others, will be demonstrating their traditional skills.

Children are not forgotten with puppet shows and their very own jousting tournament.

Manderscheid is spa town in the Rhineland-Pflaz region of Germany.

Set amidst mountains and forests, it’s an ideal spot for outdoor pursuits like hiking, cycling, and fly fishing.

Other attractions include spas, castles and the Maar Museum.

The Eifel is a stunning nature area.

The Eifel is a heavily forested mountainous area and as such you can’t fly directly to Manderscheid.

The closest international airports are Frankfurt-Hahn (not to be confused with Frankfurt International Airport), 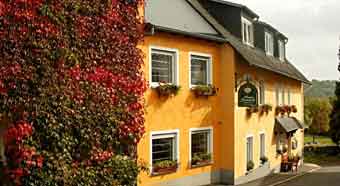 Pension Haus Sonneck is a nice guest house located in Mandersheid, with a restaurant and bar, along with a garden and terrace. There is free WiFi and parking.

Mandersheid town centre is a 10-minute walk from here and only 5 minutes to walk to Mandersheid’s two famous castles, Overberg Castle and Niederburg Castle

This pension has very good reviews from their visitors.