The Hague in Netherlands

The Hague is an important city in the Netherlands and the residence of King Willem Alexander.

What to see and do

Among them a 1.5 hour long Royal walk that takes you past the different royal monuments:

The Palace where the King lives with his wife and his three daughters.

It is located in the woods at the edge of the city. 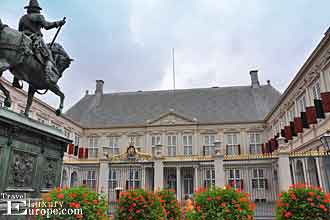 The working palace of the King.

There is free entry to the palace gardens behind the palace.

On a sunny day many Dutch people come here for a picnic.

You don’t even have to make up your own picnic basket as you can buy a lovely filled one at “Prince and Co” which is next to the palace gardens.

If you do not want to walk you can take a tour through The Hague in a horse drawn “Golden Carriage” with a coachman and a footman, or go Dutch and see the city by bike.

One of these (the orange tour) starts in Scheveningen, the famous beach resort adjacent to The Hague, and worthy of a visit in its own right.

It leads past the Peace Palace, the royal palace with its woods, and through the dunes. There are many opportunities to take pictures and stop for a drink, snack or have a picnic. 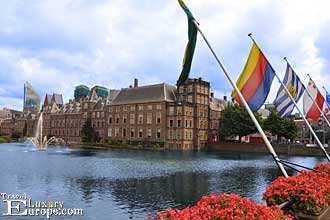 This town isn’t only a city of Palaces. It also houses the Dutch Parliament and the European Court of Justice. 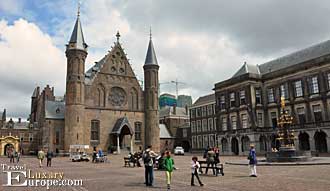 A visit to “Het binnenhof” (The Inner Court) which is right in the center of the city is highly recommended.

After entering via the Mauritz gate it seems as if you have stepped back in time.

The Binnenhof is the oldest part of The Hague. It is a cobble stoned square with a fountain with a statue of Count Willem the second, the founder of the city.

Behind the fountain you can see a gothic building, “De Ridderzaal”, (The Hall of Knights) which is open to the public.

There is a permanent exhibition in the basement about the history of the King’s speech which takes place on the 3rd Tuesday of September every year.

This is a big event. The King arrives in a golden carriage and reads out the budget for the coming political year.

After admiring the exhibition you can climb the big spiral staircase that leads to the gallery of the Hall of Knights.

From here you can look down into the impressive Hall of Knights with its wooden beams, chandeliers and stained windows and see the thrones for the King and the Queen. 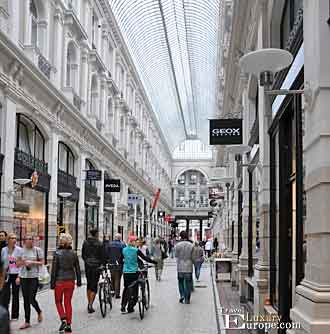 After visiting the Binnenhof you can stroll through the historic city centre to shop in the trendy shops and stylish arcades.

The city is well known for its exclusive art galleries and quirky antique and jewellery shops.

Everything here is grand in style. There are nice parks and ponds and the city counts over 400 statues and sculptures.

These are bronze statues of historic figures and modern sculptures alike.

There is even a statue by Pablo Picasso: the “Frog with umbrella”. The buildings are in Art Nouveau and Art Deco style or have been designed by famous Dutch architects to appease the rich upper-class in the city.

The official Shield of The Hague, which you can find on the façade of many official buildings, features a stork.

The stork was symbolised because they used to build their nests in and around the city. Nowadays they are rare but there have been sightings of this enigmatic bird in the woods near the royal palace. 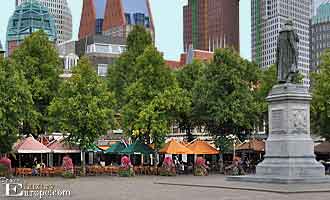 Going out in The Hague

The Hague is not short of bars, restaurants and cafés.

On a sunny day, these squares are transformed into big colourful outdoor terraces.

On days when the weather is not so nice there is an ample choice of grand cafés, restaurants or Jazz cafés.

The city benefits from having a conservatorium of music whose students are keen to perform in the cafés in the city.

In short, The Hague is a classy international city where you will never be bored. 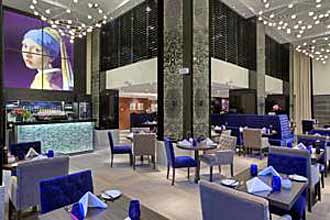 The Hague has two 5 star hotels. They are Hilton The Hague and Crowne Plaza Den Haag Promenade

The one with the best visitor reviews is the Hilton, and it’s really a beautiful hotel right in the centre of the city.

If you prefer to live by the beach, we can recommend a stay in Scheveningen at the famous Steigenberger Kurhaus.

Scheveningen is just 5 kilometers from The Hague and has a lively beach life and other things to see.

Want to know more about Scheveningen?

City Pass for Amsterdam
Share and let others know about this !!
Scroll to top
error: Content is protected !!
X