The breathtaking Palace and gardens of Granada’s Alhambra and Generalife , the epitome of an Arabian dream located in the South of Spain.

From the Moorish era in Spain

500 years of Moorish rule have left a profound mark, particularly in the South of the peninsula.

The Alhambra is often referred to as the Crown Jewel or a pearl set in emeralds.

Originally built as a fortress in 889 on one of the seven hills surrounding Granada.

Converted into a royal palace in 1333 by Yusuf I, Sultan of Granada.

It has served as the abode of the rulers of the Nasrid dynasty until the reconquest by Queen Isabel and King Ferdinand in 1492.

An UNESCO World Heritage Site since 1984, the Alhambra is the most significant example of Arab Islamic architecture in Europe.

Approach from the city either by foot or by car and enter the complex through La Puerta de Los Granadas.

Follow a steep climb to the Puerta de La Justica, a massive arch to enter the Alhambra proper. 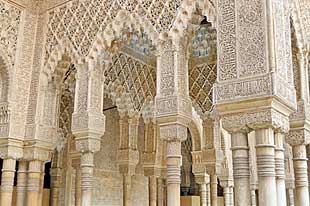 Over the centuries many buildings have been added on to the original fortress, so there is no general ‘floor plan’.

However each addition was designed with a view of creating a paradise on earth, with all the rooms of the royal quarters opening on to a central courtyard.

Walls and ceilings are covered with tiles, arabesques and calligraphy often in red, blue and gold.

Intricate stone carvings alternate with mosaics and scriptures from the Koran.

The Alhambra rests on a platform and the entire complex is completely walled in interspersed by 13 towers.

Some are watch towers and some serve purely recreational purposes. 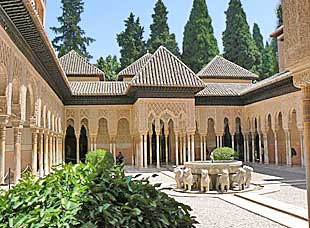 Courtyard of the Lion

The most famous features is no doubt the Court of the Lions.

A courtyard decorated with a huge fountain made of alabaster, supported by twelve lions carved from marble.

The lions symbolize the power and influence of the dynasty.

Generalife and the gardens

In tune with the paradise theme, you can feast your eyes on a sin fin of trees and flowers.

Gaze into reflecting pools and listen to the tinkling waters of countless fountains.

Another significant feature of the Alhambra is an abundance of nightingales which inspired many a poet. 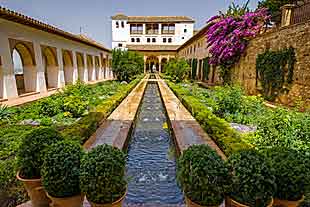 After a walk through the many halls and rooms, including the harem and the Court of the Myrtles and climbing one or two of the towers, proceed to the Generalife.

Designed and built by Muhammed III, the Generalife was the summer palace of the sultans originally connected to the main palace by a covered walkway.

The most outstanding feature of the Generalife are however the gardens.

Admire the Court of the Water Channel, a long pool framed by flower beds and fountains spewing fine sprays of water into the air.

Follow the walkways paved with white and black pebbles from the beds of the rivers Darro an Genil which flow through Granada and rest your feet on one of the stone benches in the Garden of the Sultana.

Thought to be the best preserved example of a medieval Persian garden in Al-Andalus and shaded by cypress trees.

You can visit the Alhambra with a guided tour or do it on your own.

Remember comfortable shoes, because there is a lot of walking involved. 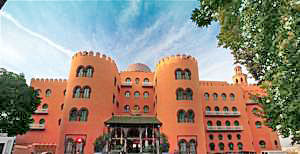 Nearby Alhambra you find the beautiful Alhambra Palace Hotel.

Inaugurated by King Alfonso XIII in 1910 as a hotel and casino, the hotel preserves the luxury and style of the beginning of the 20th century. 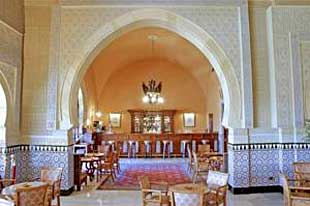 Decorated in a design which reflects the art of the Alhambra but incorporates the amenities of a modern day luxury hotel.

Home from home for many celebrities and artists, follow their example, sit on the roof terrace at night, look out over the illuminated Alhambra and the city below and let the dream continue.

Link to the hotel for more pictures and information: Alhambra Palace Hotel

Alhambra tours and more things to do around Granada