Many tourists arriving only at the airport and never see Girona.

Most are en route to the resorts of the Costa Brava, perhaps to destinations such as Blanes,  Lloret de Mar, for shingle beaches, rows of sunbeds, raucous nightclubs and shops selling sangria in a hundred types of Spain-themed bottles.

More discerning travellers head north to the more exclusive Costa Brava coastal villages, where prices might be higher, but the ambience is worth the outlay.

They head straight for Barcelona, an hour away by bus from right outside the Girona terminal building.

But they’ve missed out on one of Catalonia’s most beautiful stops for a city break.

For those who don’t want to be on a beach or battle the crowds along Barcelona’s Ramblas, Girona offers all the allure of a historic Spanish city in a smaller, more human-sized package.

There’s also an awe-inspiring Gothic cathedral, some Art Nouveau-period architecture for lovers of Gaudí who want to extend their repertoire, and a bridge designed by Gustave Eiffel before he created his famous Paris tower.

Girona has chic shopping, year-round cultural events to please the most esoteric tastes, pavement cafes for people-watchers, and a mild climate that encourages walking.

While Barcelona flaunts its appeal with the brio of a flamenco dancer, Gerona’s approach is more subtle, like a senorita peering over her fan.

Come to Girona in May for the flower festival and acapella music festival.

May is the perfect time to get to know Gerona’s charms since this is when the city puts on its annual “Temps de Flors” flower festival.

And if flowers really don’t do it for you, alongside the Temps de Flors, there’s another fabulous event – the Festival of A Capella music runs on the same dates.

Some visitors tackle the floral feast like a military campaign, map in hand, rigorously ticking off each sight on the special map from the tourist office, just near the Town Hall.

Far better is to wander up and down Girona’s winding streets: the city is built on a hill, and although it’s possible to climb up to the ramparts and look down on its landmarks.

At street level, you can go with the flow and the delight of discovery. The tourist office website is still adding new sections, but for a taster of Girona’s quaint loveliness, you can watch a city overview on this video:

The Flower Festival is an event where a central location really pays off, so it’s worth seeking an ideal place well in advance.

Girona has hotels and apartments for every budget and all tastes.

If you don’t need more than a clean room, a comfortable bed and obliging staff,

Erba by Pillow is close to the banks of the Onyar, a pleasant meander away from the medieval centre.

Perhaps you prefer it a bit more pampering. 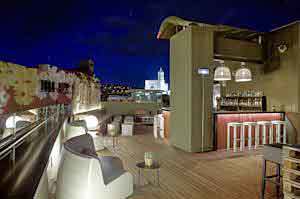 The 4-star Hotel Gran Ultonia, close to Girona Cathedral and the historic Barri Vell district, is another fabulous four-star hotel.

From the roof terrace, you get a nice view of the Cathedral and surrounding area.

More things to do in Girona