Florence – Birthplace of the Renaissance

Florence is everything you’ve ever imagined it to be – a beautiful city full of striking, historic architecture, abundant in monuments and culture, museums, churches, squares, and gardens, and more restaurants than you care to count.

Florence originated in Roman times but it’s best known for its Medieval period in history when it became the birthplace of the Italian Renaissance.

It was one of the most important cities in the whole of Europe at this time, and it was during the ‘golden age’ that the majority of Florence’s major landmarks were constructed.

Today the city is home to around 357,000 people but roughly 1.6 million tourists flood to the city every year to see its sights.

Florence has so many beautiful buildings and monuments that you’d never get to see them all in a short visit to the city.

Just wandering around the historic centre is special and even if you don’t go inside many of the buildings you can still admire their beauty from outside.

The centre is so impressive with its medieval Renaissance period architecture that it was designed a World Heritage Site in 1982.

Read more about the attractions

How to get to Florence ?

As the capital of the region of Tuscany, it is the largest city in this part of Italy so it’s well linked to the rest of the country and the world, via its international airport.

Florence Airport Peretola is just outside the city centre, and despite being such a popular city with tourists from around the world it’s actually a fairly small airport.

There are no flights to Florence from outside of Europe, so when travelling from North America, Asia, or South America you’ll have to fly via one of Europe’s hubs such as London, Amsterdam, Frankfurt, Paris, or Madrid.

Another option is to fly in to the Pisa International Airport, as this is the main airport for Tuscany and is connected to Florence via train and road.

During the summer Florence isn’t naturally cooled by a prevailing wind so the city can get quite hot and muggy from June to August so dress in light and loose clothing if you’re visiting then.

The average high temperature peaks in August when it’s 31.5C, but July about the same.

Mainly Mediterranean climate here, but it can be rainfall in the summer, so don’t forget an umbrella or rain jacket.

Rain is heaviest in the autumn and early winter, peaking in November.

Winters are cool and there can be snow so it’s not ideal for wandering around the city.

Florence has oodles of hotels to choose from; in fact there are over 680 places to stay in the city so you’ll never be short of choice here.

Of course these range in ratings and price, with prices all across the board though staying in the historic centre (which is most popular) is now strikingly more expensive than elsewhere in the city.

Hotel Londra – Firenze is a 4 star hotel convenient for the station but only a short walk into the heart of historic Florence. It’s a stylish and modern hotel.

If you prefer something with more historic charm and luxury, try the 5 star Hotel Savoy 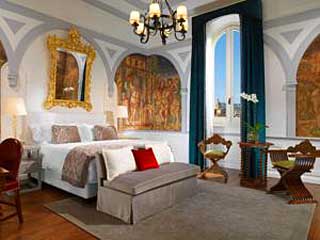 The 5 star St. Regis Florence lies beside the Arno River and has stunning views of the Ponte Vecchio. A historic building designed by Brunelleschi. It offers a spa, gym and luxurious rooms with antique furniture. 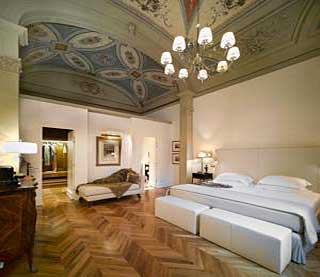 Relais Santa Croce is one of the most luxurious and elegant hotel in Florence. It is located right in the historic center, between the Basilica of Santa Croce and the Cathedral. 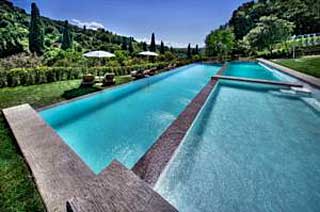 Perhaps the absolute prettiest luxury hotel is Il Salviatino a bit off the touristy center.

Can sometimes be hard to be a tourist in Florence and then it is perfect to relax in the hotel’s stunning landscaped gardens and lounging by the pool.

Things to do in Florence