A fair perfect for those intrigued by history, culture and theatrical reenactments.

In the geographical heart of Catalonia, Spain, you will find yourself transported to the 18th century in the Medieval Market of Manresa.

The festival recalls a mystery dating back 650 years to which a light from Montserrat mountain was said to have illuminated the church of Carme.

In this way, the conflict that had interrupted the construction of the Acequia de Manresa was resolved.

In the end of February, the historic town of Manresa is filled with masters of ancient trade, craftsman, joglars, funambulists, and variant attractions that revive the essence of the 18th century.

Divided into three zones, explore over 200 exhibits of food, music, medieval workshops and surprise acts by live performers among the crowds.
For Children/Family Friendly

Workshops for children will be held at the Plana del Om.

The company Manresana Historic events will offer the following free workshops during the Fira de l’Aixada:

In La Plana del Om, there will be an exhibition of siege weapons, (weapons
which were formerly used to destroy or overcome fortresses, walls and castles
during a siege), by Michel Redrado.

On Sobrerroca street, there will be a workshop of Musical instruments demonstrated by Alejandro Ballestar.

At Parc de la Catedral, participants will be spellbound at the Magic School where reenactments of 18th century rituals are held.

Leather workshops and a wicker and wool workshop will also be hosted in the Parc de la Catedral.

Learn the trades of glassblowing, tinsmiths and ceramicists with local artists at Parc de la Seu.

This year, as in previous years, participants are encouraged to partake in a photography contest through social networks. Learn more on the festival’s official website.

Official website: http://www.aixada.cat/ (Only in Catalan – hopefully they get into business soon :)

Hotels: Overview of all hotels in Manresa

From Lleida:
C-25 highway (Eix Transversal) or A-2 highway.

Buses in the towns of the Bages region: http://atm.ccbages.cat/pla-millora/horaris 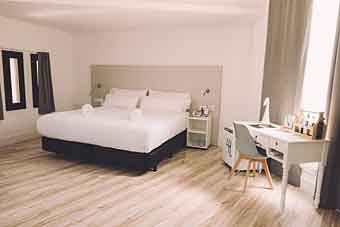 Central in Manresa with nice spacious rooms and good ratings on visitors reviews.

All room has a balcony with a city view, air conditioning and a flat-screen TV.

Overview of all hotels in Manresa here >>