Four days of music, in the exceptional setting of the Château de Fontainebleau Park,(only one hour from Paris), to pay tribute to the swing and modernity of the greatest jazz guitarist.

The area around Samois-sur-Seine/Fontainebleau was the adopted home of the legendary father of gypsy jazz until he died in 1953.

In 1968, the Association of Friends Samois paid a tribute to Reinhardt by playing his songs.

This was repeated every five years until 1978, when the Festival Django Reinhardt Association was born and the event became an annual musical salute to the “guitar in human voice.”

Major acts in the past have included giants of jazz such as Chet Baker, Bill Colman and TS Monk.

A don’t miss for fans of the genre.

This Jazz festival has an unique sourounding of the Fontainebleau Castle and parc.

Make sure to visit this national museum and World UNESCO Heritage Site while you’re here.

It is one of the largest French royal castles and has been a residence for the French monarchs from Louis VII to Napoleon III.

Hotels: Overview of hotels in Fontainbleau

Stay close to the Fontainebleau Castle and Festival Venue

Mercure Château de Fontainebleau
Nice rooms and good reviews. Only 500 metres from the castle and gardens.

For a lower budget you can check out ibis Château de Fontainebleau. Good hotel and only 200 metres from the castle.

Note ! All those central hotels will sell out quite quick for this festival dates, so book early in advance.

When fully booked you may look for other options some kilometres from the castle and centre.

Overview of hotels in Fontainbleau 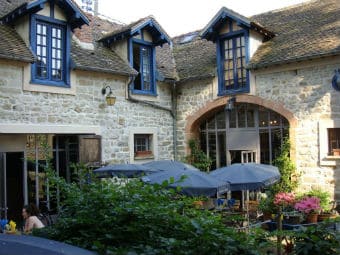 Revel in French country comfort at this former horse stables, located in the heart of Bourron-Marlotte village and 7 km from Fontainebleau.

Replete with original wooden beams, antique furniture and decorated in traditional style, you’ll be taken back in time.

Grouse over  the continental breakfast and ask the hosts to prepare packed lunches.

Free private parking as well as a mini-farm of hens and horses in the garden.

Things to do in Fontainebleau