Ephesus – Ancient History at its Best 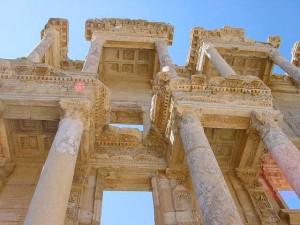 Ephesus is to Turkey as Pompeii is to Italy.

A spectacular monument to ancient times that is vastly impressive, and really has to be seen by anyone visiting this part of Turkey.

Ephesus is a popular excursion in Turkey as it is easily accessible from the coast.

Situated just a little way inland from the coastal town of Kusadasi – a popular destination where you can take a day trip to Ephesus.

Then later a Roman city of great importance.

At one point during the Roman period it was one of the largest cities in the Mediterranean world with a population around 250,000 in the 1st century BC.

Features like the vast theatre today give a taste of the size and importance of Ephesus, and if it weren’t for the fact that the harbour became silted up, the city could well have prospered for many more centuries beyond what it did.

It’s hard to believe today that Ephesus was originally a harbour city, sitting on an inlet of the Cayster River so technically it was on the coast.

Today though, with major sedimentation having blocked the harbour and filled in a great deal of land, the ancient city is actually about 3 miles (5 kilometres) inland. 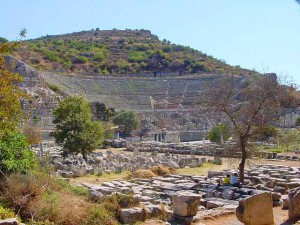 The Theatre is the largest and most impressive landmark in many visitor’s eyes.

From a distance you can get a taste for the size of it, but to really appreciate the sheer scale you need to climb the many steps to the top of the theatre and look down.

You should do this anyway, as the views from the top are spectacular, allowing a bird’s eye view over Ephesus and the surrounding countryside. The

Theatre is believed to be the largest outdoor theatre in the ancient world.

It could hold a staggering 24,000 people and was used for all manner of events and performances, from gladiator and animal fights, concerts, plays, religious and political talks, and more.

The theatre is again indicative of what a great city Ephesus was in its time, and the well preserved seats and stage of the Theatre have stood the test of time.

As one of the most popular and best known attractions in Turkey a visit to Ephesus really is highly recommended.

To get a true sense for the scale of this city you should plan on spending half a day here, at least, but if you want to see just the highlights you can whiz around in a couple of hours. 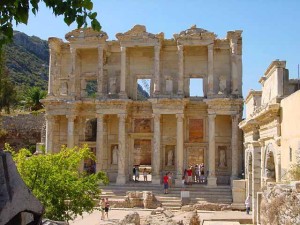 The best known landmark is the Roman Library of Celsus.

You could easily mistake this for being a temple, it’s that grand.

Back in Roman times libraries were exceedingly important and this one held nearly 12,000 scrolls.

It was originally built around 125AD and it’s the tall and beautiful facade that’s been painstakingly reconstructed from all original pieces that makes this such a famous landmark. 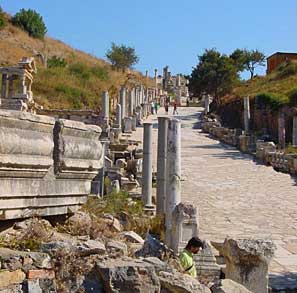 There are three main streets in Ephesus that you will walk along to get around the ancient city:

Arcadian Street was the first one that many visitors would see in ancient times as it came up from the port.

It was lavishly constructed with marble slabs and columns so that anyone visiting was impressed and awed by the wealth of the city.

The street was home to shops and galleries and was lit by street lights.

The two other main streets diverge from the Library of Celsus:

The latter was one of the main residential streets as there were once houses lining it and making their way up the slopes from the centre of the city.

The demise of Ephesus was greatly influenced by the filling of the harbour.

As there was no direct link from the city to the Aegean Sea trade declined, and its residents began to move elsewhere.

After several other civilisations lived here, the city grew smaller and smaller and was eventually forgotten until being rediscovered by archaeologists in the late 1800s.

Excavations are still exposing new discoveries today so the ruins of the ancient city are always changing.

Tours and things to do around Ephesus

Load more
Share and let others know about this !!
Scroll to top
error: Content is protected !!
X