Dubrovnik – Pearl of the Adriatic

The city is probably the best known in Croatia, and is one of the most visited destinations on the Adriatic coast.

It is a beautiful city with some of the best medieval architecture you’re likely to see – the walled city has been a UNESCO World Heritage Site since 1979, making it among the earliest destinations to receive this accolade.

It’s believed in local lore that Dubrovnik was founded in the 7th century. The town began to grow and prosper under Byzantine Empire rule, then between the 14th century and 1808 it was ruled as a free state.

During this time, particularly over the 15th and 16th centuries, it reached its peak and many of the buildings within the old city date from this period.

The old town is the top attraction, but there are beaches in the city too if you’d like to combine sightseeing with lazy days on the beach. 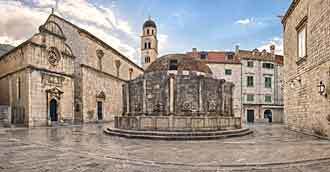 The Old Town is by far the best and most visited attraction in Dubrovnik.

Whether you appreciate it for the historical value – it is one of the best preserved medieval cities in the world – for the architecture itself, or simply for the nice ambiance and atmosphere it has, you’ll love Dubrovnik’s old town!

Contained within walls that were built mainly between the 12th and 17th centuries, the old town of Dubrovnik has remained compact and therefore easy to get around on foot.

Having said that, by foot is the only way to get around the old town because it is completely pedestrianised. This has made it a pleasant place to walk but a little challenging for anyone with mobility issues. 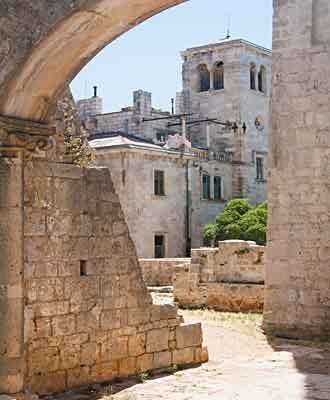 Simply wandering around the many streets is a nice way to spend an afternoon, but if you want to actually visit many of the landmarks and monuments you’re going to need more than a day to fully appreciate them.

If you are stuck for time consider walking along the city walls. They wrap around the old town providing excellent views into the town on one side and the water on the other, and go for a distance of 2 kilometres.

Along the way there are various forts to see too including Minceta Tower and St John Fortress.

There are numerous churches, several palaces, the old harbour, and a few museums to pop into while exploring the old town, and when you need a break stop in one of the many restaurants, bars or cafes. 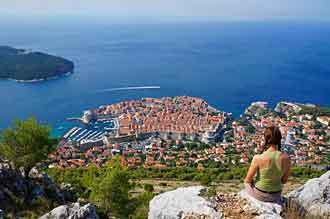 There’s life outside the old town too so if you have time do explore some other parts of the city.

Take the cable car up Mount Srd for example, and enjoy a fabulous view over the whole city. 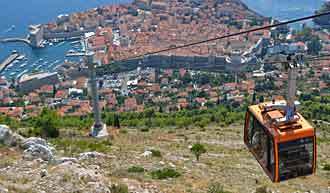 The cable car runs from just behind the old town and takes only about four minutes to rise to 412 metres. At the top, as well as the amazing views, there’s a restaurant and a small store.

You can take a ferry to the nearby island of Lokrum and visit the fort, monastery, botanical gardens and naturist beach. The fort on Lokrum is another place that provides excellent views of Dubrovnik.

As well as the naturist beach on Lokrum Dubrovnik has a couple of other beaches for a lazy day – Banje Beach is closest to the old town, or Lapad Beach is about 3.5 km from it.

Dubrovnik Airport is roughly 16 kilometres (10 miles) outside the city centre and in terms of passenger numbers it’s the second busiest airport in Croatia.

Many airlines use the airport, though nearly all the flights offered are seasonal and charters.

British Airways has year round flights from London Gatwick; Lufthansa and Lufthansa Regional offer flights from Munich, Frankfurt, Dusseldorf, and Berlin as examples, but if you’re travelling from outside Europe you’ll need to connect through one of these larger cities first.

Over 1000 accommodations to choose from

Over 1000 hotels or apartments in Dubrovnik range from low budget up to the highly luxurious. Those that are closest to the Old Town are always the most desirable and pricey. 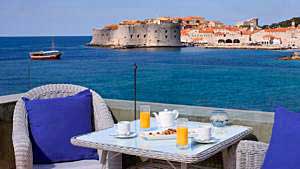 Hotel Excelsior is one example of a 5 star hotel in Dubrovnik that is just 5 minutes walk from the Old Town, while The Pucic Palace is right in the Old Town itself. It is set within an 18th century Baroque palace. 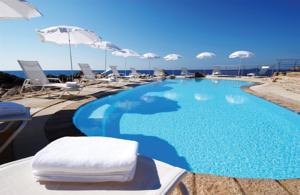 Hotel Dubrovnik Palace is an other five star hotel situated at the Lapad Peninsula just outside town with a private beach and a scuba diving center.

In all, Dubrovnik has seventeen 5 star hotels to choose from, and many more 4 star hotels. 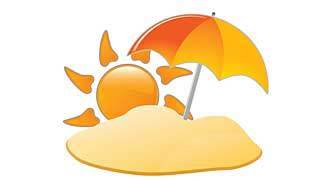 Dubrovnik is somewhere in between a Mediterranean and a humid subtropical climate because while it is hot and sunny the summers do experience more rainfall than most Med cities.

The average high in July and August is 28C so it’s hot but not too hot here, cooling to an average low of 21C overnight.

July and August are the driest months of the year so visiting at this time is recommended, but still, pack an umbrella or light jacket just in case you’re caught in a shower.

The streets will be quieter in May and June and rainfall is still not problematic during these months, though it does pick up the other side of summer, particularly in October and November.

Still, Dubrovnik benefits from over 2,500 hours of sunshine per year which is impressive!

Dubrovnik Summer Festival is the largest and best known annual festival in the city. It’s held over 45 days between 10 July and 25 August and features many dance performances, music, theatre and opera.

The performances are very popular so you should try to book tickets in advance if planning to attend.

The Carnival in Dubrovnik is also worth a visit if you plan a journey here in wintertime.