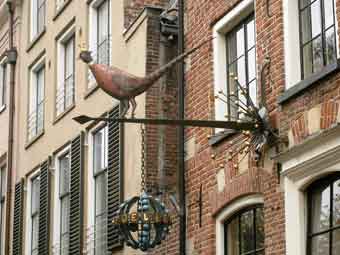 Deventer in Netherlands is home to one of the more unusual festive season festivals.

It’s a weekend when the city Deventer brings the 19th Century stories of Charles Dickens to life.

Come and meet the many colorful characters from his works at this exciting festival.

About the Dickens Festival

Christmas trees and tiny lights transform the historical buildings into a 19th Century wonderland with a romantic feel.

In 2015, the festival was nominated for the Best Public Event in the Netherlands.

During the weekend, there is also a Christmas Market in the Grote Kerk and an antique and Brocante market in the Oude Mariakerk.

Entrance is free but, due to its popularity, waiting times can be up to one and half hours.

Around 135,000 visitors are expected throughout the weekend.

Charles Dickens, 1812 – 1870, is one of the most famous and influential English writers of the 19th Century.

Where: Deventer, The Netherlands

How to get to the Charles Dickens Festival

Deventer is a medieval Hanseatic city situated in the middle of the Netherlands.

The festival takes place in the central Deventer Bergkwartier.

Situated approximately 100 km east of Amsterdam, you can reach Deventer in 1.15 hours on the train or by car.

During the festival, there is extra secure parking, including a bus to the center, available for €9 per car.

If you are traveling by bike, there is free secure parking available by the Central Station and Op de Keizer.

Set amidst beautiful countryside on the banks of the river IJssel, this lively, historical Hanseatic* city features a well-preserved medieval center.

A city with a long history of hosting festival, it holds a number of other festivals throughout the year including:

*Hanseatic League: this was an economic league formed in the mid-thirteenth century by North German seafaring merchants and included 187 cities across 16 countries.