Set in the heart of the Dolomites in Northern Italy, Cortina d’Ampezzo is a beautiful place filled with beautiful people.

While it may not have as many 5 star hotels and Michelin starred restaurants as Courchevel, Cortina is still a destination for the elite and is considered to be Italy’s most fashionable ski resort.

It hosted the 1956 Winter Olympics and has starred in several blockbuster movies including For Your Eye’s Only, and The Pink Panther.

There are over 50 places to stay in Cortina listed on booking.com, and this includes two 5 star hotels, and eighteen 4 star so there’s plenty to choose from at the luxury end of the scale. 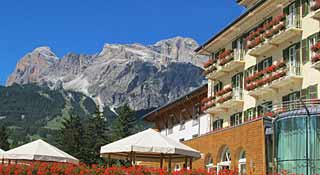 Take the Grand Hotel Savoie for example; a luxurious hotel right in the heart of the town which has stunning mountain views, and it’s an elegant and historic building restored with all the modern conveniences. 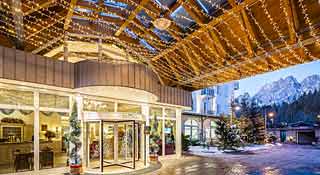 The Cristallo Hotel Spa and Golf is the second 5 star hotel in town and it was the first 5 star luxury hotel in the Dolomites.

The hotel is just outside town but guests can make use of the free shuttle to and from the centre, while enjoying the slightly quieter atmosphere surrounding the Cristallo.

Getting to the Resort

You can quite easily drive in to Cortina as the roads are good and remain clear most of the time.

Being in the valley the resort area is not as high an elevation as some ski resorts so the road doesn’t get as much snow as others would.

If you’re flying in, Venice is the best option for international arrivals and you can drive from there or catch a train to Pieve di Cadore, about 35 kilometres out from Cortina and then get the dolomitibus the rest of the way.

Dining in the Valley

Cortina and the surrounding valley features some wonderful restaurants. There is over 70 restaurants in the town, including the restaurant at the Cristallo Hotel which is renowned as one of the best in the valley.

As you would expect, many of the restaurants serve gourmet cuisine with the prices to match though there are many affordable restaurants in the resort too.

Son Forca, in the ski area Cristallo, has a lovely sun terrace and their gnocchi is wonderful. Best Pizza is said to be at Il Ponte.

Try the affordable restaurants Croda Café, Cinque Torri or Ariston, some of the most popular places in Cortina.

Zermatt in Switzerland, home of the Matterhorn

Snowbombing Music Festival in Mayrhofen, Austria, 4 – 9 April 2022
Scroll to top
error: Content is protected !!
We use cookies on our website to give you the most relevant experience by remembering your preferences and repeat visits. By clicking “Accept”, you consent to the use of ALL the cookies.
Do not sell my personal information.
Cookie settingsACCEPT
Manage consent