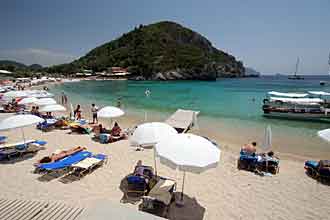 Corfu has long been attracting tourists and while the type of tourist has changed over the years, one thing never changes – the island’s hospitality.

It is of the most welcoming of the Greek islands; renowned for being a safe place to bring children (as are all the Greek islands really) and for its warm atmosphere, whatever your background.

As you’d expect, there are lovely beaches, beautiful scenery, great food, history and culture to explore on this, the second largest of the Ionian Islands.

Travelling to the Island

Corfu is right at the north western edge of Greece and actually overlaps the coast of Albania.

It is quite close to the ‘heel of Italy’ and well linked by ferry services from Italy and of course from Greece itself.

The best way to arrive in style is by luxury yacht and there are several marinas close to Corfu Town where you can moor.

Being at the northern end of the country the island would make a good place to start a cruise of the Greek coast and Ionian Islands, so consider this as a setting off point.

Most tourists arrive on the island by plane, landing at the International Airport – aka Ioannis Kapadistrias – and there are minimal services to the island throughout the year, with the majority only operating during the summer months.

Most airlines are charter, bringing the package tourists from the UK, Germany and other European countries but if you prefer to go scheduled you can fly with Olympic Air from Athens, Monarch from London Luton, or Aegean Airlines from several different cities around Europe.

There are no direct flights from outside of Europe, but by travelling to a major hub such as London, Amsterdam, or Frankfurt, there are numerous options for flights from there.

Once landed there are taxis and public buses to take you into Corfu Town.

That isn’t to say there’s nothing to see or do, but it is a quieter island and this serenity is likely to appeal to some visitors more than others.

Corfu Town, known locally as Kerkira or Kerkyra, is by far the main destination on the island.

Its historic old town is a major attraction and, as the home of both the airport and the main port, most of the island’s visitors arrive here.

The old town has been named a UNESCO World Heritage Site and you can easily see some of the architectural influences from past foreign powers such as the Venetian and the British.

Two other popular destinations are Benitses, and Paleokastritsa, as well as Kavos which is a livelier resort town right at the southern end of the island.

To most visitors it is known as Corfu Town, but in modern day Greece the main city on the island of Corfu is actually known as Kerkyra.

Either way, this is the chief destination for the entire island and serves as a regional capital for the whole archipelago of the Ionian Islands.

It’s a great place to stay if you want to enjoy the more lively side of the island, or simply come here for a couple of day trips from one of the smaller towns or resorts as there are always buses traveling this way.

Corfu is more rainy than you might expect but the great thing is, almost all of the rain falls outside of the summer.

This means if you visit during the summer you’re almost guaranteed hot and sunny days with barely a cloud in the sky!

June, July and August are by far the driest months of the year and the temperature in June is a warm 28C (average high).

July and August are several degrees hotter at 31C and although it drops back to 28C in September this is a wetter month.

By October, when many Greek islands would still be very nice for visiting, this island receives heavy rainfall, peaking in November and December.

This makes it an unfavorable destination for winter travel and in the spring you’re better waiting until May for pleasant temperatures are less rain. 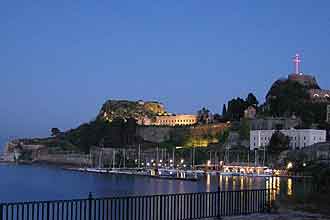 What to See and Do

One of the town’s nicknames is Castle City as it is home to two castles.

The aptly named New Fortress and Old Fortress are actually both old, but the older of the two was built by the Venetians on an artificial islet.

Though some of the external fortifications are eroding there are parts of the interior that have been restored and it’s now a popular cultural venue.

While this is recommended for a visit the New Fortress is even more impressive.

It’s a large construction that offers fabulous views over the city and is fully open to the public for tours.

You could easily spend an afternoon here, exploring its corridors.

The Old Town is the part of the city that’s been inscribed on UNESCO’s World Heritage List.

This is also a great place to wander around the narrow cobbled streets, most of which are too narrow for today’s vehicles. Down by the water, near the fortress, you’ll find some great restaurants and bistros.

As the main town on the island you may expect to find dozens of hotels though this actually isn’t the case.

In fact, the whole of the island has not been overdeveloped so it’s retained a special charm that some tourist destinations just don’t have.

That being said, there are 20 places to stay in the city on Booking.com and if you’re looking for luxury two of these are 5 star hotels:

The Cavalieri Hotel, for example, is set within a former 17th century nobleman’s mansion and is 4 star rated. Another 4 star property is the Siorra Vittoria Boutique Hotel which was an 18th century mansion.

Both these large hotels offer all the facilities and services you could possibly need, and the former is only a ten minute walk into the town centre.

If you do like the larger resort style hotels there are several others to choose from as well, such as Ariti Hotel, but some of the smaller hotels have a wonderful charm that should be considered too.

The Corfu Palace
The Holiday Palace