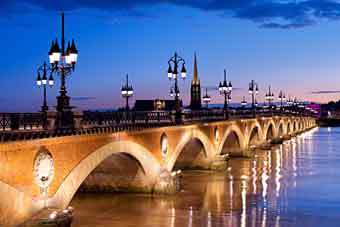 Just say the name, Bordeaux, and you instantly think of wine!

Bordeaux is, after all, the capital of one of the world’s premier wine producing regions, making the area around 14.5 billion euros per year.

But wine is not the only thing that this city has to offer.

The ninth largest city in France, it is the capital of the Aquitaine region and is located in the south west of France, on the Garonne River.

Although it’s inland Bordeaux is a port city with a historical center that’s been listed a UNESCO World Heritage Site.

What To See and Do in Bordeaux

Bordeaux is best known for its wine, and if you enjoy a glass or two, you can explore some of the region where one of the world’s best known wines are produced.

There’s more to the city than just wine; architecture features prominently, especially in the historic heart of the city which is home to one of the largest 18th century architectural urban areas in Europe. 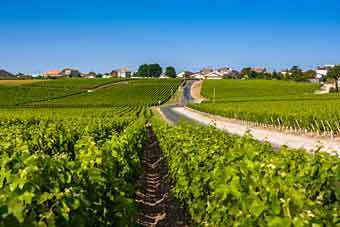 As the second largest wine growing area in the world, the region surrounding the city is certainly not short of a vineyard or two.

You can get out of the city and explore some of these on your own, or make use of the many vineyard tours that are offered through a large number of tour operators in Bordeaux.

Organised tours are not for everyone but they do have their advantages, one of the major ones being you won’t have to worry about driving after all the wine tasting you’re going to do!

For a higher cost you can get a tailor-made tour that takes you exactly where you want to go, and you won’t have to share a minibus with other passengers.

You can also consider timing your visit to the city to coincide with the annual summer wine festivals for even more opportunity to sample some of the excellent local wines and culture.

Check out some wine tours here

Bordeaux really does have a vast collection of beautiful historic architecture and the city was recognised for this by being awarded as a UNESCO World Heritage Site.

There are actually 362 historic monuments, and within the whole France, only Paris beats this number.

Among the more than three hundred monuments picking out the best is a challenge so maybe head for ones that particularly interest you. 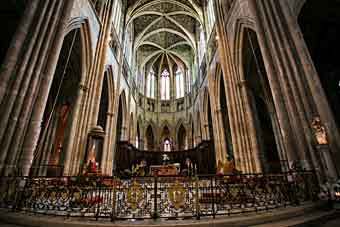 There are countless churches for example, if you enjoy religious architecture, and many of these are Gothic in style.

The Basilica of Saint Michael is one example of Gothic – it’s Flamboyant Gothic built between the 14th and 16th centuries.

Saint Andre, or Bordeaux Cathedral is another major church. It was consecrated in 1096 and the structure dates from the centuries following. 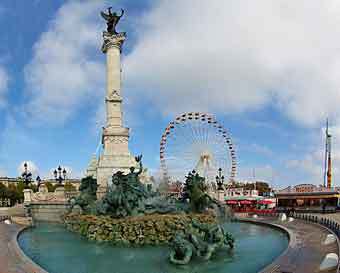 Place des Quinconces is a very major landmark. It is one of, if not the largest, city squares in Europe covering an area of about 31 acres (126,000 square metres).

Its centre is a large expanse of nothing, though to the sides are mature trees that were planted when the square was constructed.

The river sits at the eastern end of the square, separated by a road, while at the western end is the major monument of the square which was erected between 1894 and 1902.

The two botanical gardens of the city are nice places to relax after a day of admiring the urban architecture.

Jardin Botanique de la Bastide is on the right bank of the Garonne while the older Jardin Public is opposite across the river.

Events and Festivals in Bordeaux

One of the main events in Bordeaux is the big wine festival arranged every other year. “Fete le Vin”.

Read more about the next Bordeaux Wine Festival >>

Bordeaux is a relatively large city but if you’re here for the main tourist attractions these are mostly concentrated around the city centre.

So choose a centrally located hotel to stay in and you should have no trouble seeing the main sights.

There are numerous hotels set around the locality of the train station, though this is by no means the only place to stay.

If you’re looking for grandeur and luxury the city certainly has hotels to suit your tastes. 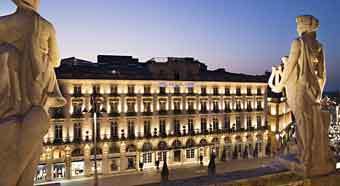 There are some great 5 star hotels including Grand Hotel de Bordeaux and Spa which is in the heart of the historic center, opposite the Grand Theatre.

This really is a magnificent hotel with all the features you would expect.

Close by is the 4 star rated Hotel de Seze, another good option for a centrally located hotel.

An other great hotel is Le Boutique Hotel Bordeaux, also in the city center.

Just 12 kilometres (7.5 miles) outside the city, in the town of Merignac, is the Bordeaux-Merignac Airport.

It’s the sixth busiest in France in terms of passenger numbers and handles airlines from all over Europe throughout the year.

A public bus and a shuttle bus both provide transfer options from the airport into the city, or you can rent a car and drive the short distance yourself.

However, parking and driving in the city itself can be a hassle with expensive parking rates and narrow streets.

You may not expect it, but Bordeaux has more rainfall than Paris or London though it is warmer than both of these cities thanks to its more southerly latitude.

The driest months coincide with the hottest of the year, so July and August are definitely good times to visit.

The average high in both months will be around 26.5 C. Visiting either side of July and August will bring warm temperatures too, and slightly quieter attractions, though the compromise is a little more rainfall.

Despite the rain, the city is actually very sunny with close to 2000 hours of sunshine per year!

More from Bordeaux and France