Attractions and what to see in Berlin

Lots of attractions, landmarks, museums and historical monuments in Berlin.
Here are a few tips on some of them.

A triumphal arch on the Pariser Platz and is now the symbol of the united Germany and the most famous and popular attraction in Berlin.

One of Berlin and throughout Germany’s biggest symbol and landmark. The gate was built 1788 – 1791.

When the Nazis came to power 1933, they used the port as a symbol of their power.

It was the only building that remained standing among the ruins of Pariser Platz 1945.

Closed down in 1961 when the Berlin Wall was built, but when the Wall fell in1989, Brandenburg Gate became a symbol of peace and unification of the city.

Sightseeings with Brandenburg Gate Hotels nearby On Google Maps 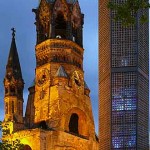 The ruins of the old Kaiser Wilhelm Memorial Church in Charlottenburg at Breitscheidplatz next to the Europe Center.

It is one of the few visible memories in Berlin after the second world war.

The church was built between 1891-1895 in memory of Emperor Wilhelm I.

He is among other things known to have been in the battle against Napoleon in 1814 – 1815.

He was proclaimed the first emperor of the German Empire 1871.

His granddaughter, Victoria of Baden, was Queen in Sweden 1907 married with the King Gustav V.

After the war the ruin was scheduled to be demolished to make way for a new modern design.

But after protests it became preserved.

Instead a new church, drawn by Egon Eiermann, was built between 1959 and 1961 right beside the ruin.

Inside the octagonal nave of the church the colored glass blocks gives an intense blue light and meditative calm.

In the Memorial Hall, in the old tower, the visitor are reminded of the horrors of war and destruction. 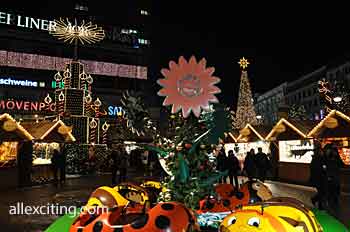 From last week of November and til Christmas, it’s a nice Christmas-market here at Breitscheidplatz. 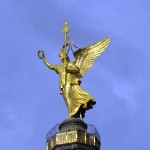 The Victory Column, is a monument in the “Grosser Stern” in Tiergarten in Berlin, located in the middle of the roundabout on Strasse des 17 June.

You can go up the monument and at the bottom is a museum which discloses Siegessäule’s history. 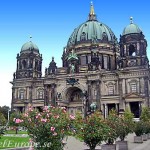 An amazing building that is a must to visit.

Free entry if you just want to look at the beautiful details of the church.

For a fee, you can also visit the museum in Berlin Cathedral.

Sightseeings with Berlin Cathedral Hotels nearby On Google Maps 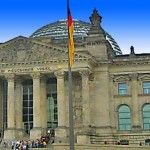 Parliament is just a few hundred yards north of the Brandenburg Gate.

Here you can go up the glass dome and get a nice view, but expect long queue.

Berlin’s most famous pass point on through the wall and border that divided East and West Berlin 1945-1990. Major tourist attraction and is located on the border of Mitte and Kreuzberg.