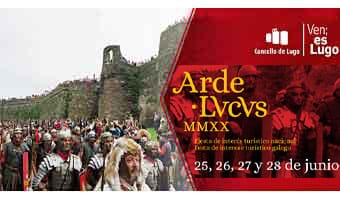 Lugo provides an unforgettable setting, and this festival is a must-see for history lovers and fans of pageantry.

Lugo is surrounded by intact Roman walls that stand 10 to 15 metres high and were built in the 3rd to 4th centuries.

It’s the finest example of it’s kind in Western Europe. In 2000 it was listed by UNESCO as a World Heritage Site.

To celebrate this fact the locals held an event, which has grown in popularity with almost a 1 million visitors now joining the local population for the annual festivities.

Rich in history, Lugo has been home to the Celts, a center for pilgramages in the Middle Ages as well as a fortified Roman town.

So don your toga or gladiator gear and join the three days of Roman-times fun and festivities.

Lugo really is off the beaten track.

The closest airport is Santiago de Compostela Airport, about two hours away by bus.

Lugo is easy to navigate by foot so travelling to the city by train or bus are ideal options.

You’ll find Lugo in the northwest of Spain nestled between mountains and coast.

Its defining factor is that it’s the only city in the world to be surrounded by intact Roman walls.