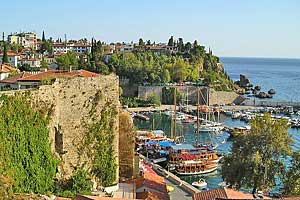 They say that Antalya is the fastest growing city in Turkey, and looking at the population growth this seems to be true!

The city is also rated as one of the most visited cities in the world, attracting around 10.5 million visitors in 2011 when it was the fourth most visited city destination.

So what is it about Antalya that makes the city so popular? Why has the population grown from less than 400,000 in 1990, to around 1 million today?

Well, Antalya is usually the last stop on a Blue Cruise around the south western coastline of Turkey so there are thousands of travellers coming here by luxury gulet or luxury yacht.

But, this is just a small proportion of the 10 million or so who come here every year. Most of the tourists come for a week or two, attracted by the good weather, the stunning scenery and beaches, the ancient history, and the not-so-ancient history.

The culture and cuisine are tempting factors too, and Antalya appeals to many markets of visitors, from all over the world and in all budgets with its superb range of accommodation.

Luxury Hotels by the beach and in the city

For the discerning traveller there are over a dozen luxury hotels in Antalya, some by the beach, and some closer to the city centre, depending on your tastes.

Several of the 5 star hotels are close to one of the top beaches of Antalya, Konyaalti, which reaches for miles. 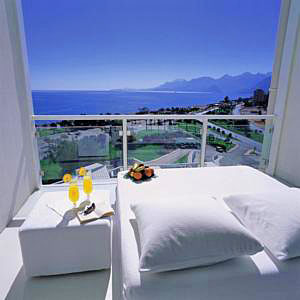 The Sealife Family Resort Hotel is one example, as is the stunning Hotel Su. Club Hotel Sera is on Lara Beach, another popular spot in the city. 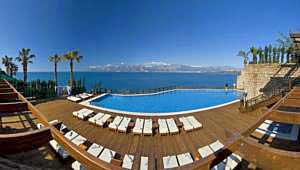 Those who prefer to be more in the heart of the city may like the location of the Ramada Plaza Antalya that is set on the seafront. 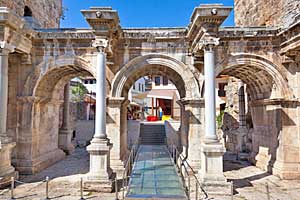 In addition to those beautiful beaches Antalya has many more attractions to keep you busy for at least a week.

The old centre of Antalya is an atmospheric and charming part of the city today. Called Kaleici, the old historic centre is full of cobbled streets, all contained within protective walls.

The nice thing about Kaleici is the variety of architecture and history. There are some structures that date right back to Roman and Byzantine times, while more recent additions came from the Seljuks and the Ottomans.

Hadrian’s gate is one landmark to head for. It’s a triumphal arch built in honour of the Roman emperor Hadrian, in the 2nd century BC, and at one point it was walled in by the city walls.

When part of the walls collapsed the gate was revealed once more and was still relatively unharmed. All around the city there are mosques galore, dating from many different periods in history, but you’ll also come across churches, traditional houses, Turkish baths, and old caravanserai.

Antalya has a number of museums to visit as well. If you visit just one though, make sure it is the Antalya Museum, as this excellent archaeological museum is well worth your time. 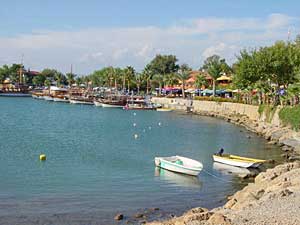 If you have the time to spare while staying in Antalya there’s an assortment of ancient sites and other places to visit just outside the city too.

Side (pronounced ‘sid-eh’) is about 50 miles (77km) to the east of Antalya and it offers quite a different scene to the larger city.

It’s a tourist town but with plenty of charm; set right on the coast it has an attractive marina, waterside restaurants, and the ruins of the Temple of Apollo just a few minutes walk from the heart of the town.

Shopping in the TerraCity Mall

Antalya offers all the usual shops to buy souvenirs, but for real (as opposed to fake) designer names you can visit the TerraCity Mall in the Lara neighbourhood of Antalya.

This mall has numerous international brand names if you’re in the market for some luxury shopping.