Amsterdam – what to see and do

Amsterdam is many more things than just the capital and largest city of The Netherlands.

Once you can tear yourself away from these things there are excellent museums to explore, cafes to relax in, and a laid-back atmosphere to enjoy.

Even if Amsterdam is the country’s largest city, it doesn’t feel overcrowded.

The historic heart of Amsterdam does get busy during the summer months, but there are always quieter streets that you can explore away from the crowds if you prefer.

When to Visit Amsterdam

The city can also be enjoyed during the winter, but it will be colder and damper at this time of year so you’ll need to wrap up warm if walking around.

The advantage of visiting in the spring is warmer weather and the chance to see thousands of beautiful tulips in flower, which really is a wonderful sight.

By July and August temperatures are pleasant with average highs around 22 C, a great temperature for exploring on foot or by bicycle.

There is still rain in the summer (it can rain any time of the year here), so come prepared with an umbrella and/or raincoat and you should be fine.

Nestled between canals and alleyways in a part of Amsterdam that really looks no different to the rest is the city’s most famous district, the Red Light District.

Known locally as De Wallen (meaning The Quays) this well known neighbourhood is set in the heart of the oldest part of the city and covers several different streets, canals and alleys.

Prostitutes don’t hide themselves away, so it does come as quite a shock to some tourists to see half naked women sitting or standing in street-level windows waiting for customers.

During the day, the majority of people wandering around the Red Light District have just come to check it out for themselves, though by night it can be quite a different story as numerous groups of bachelors wander around, enjoying their stag parties!

These visible windows are just one feature of the Red Light District; it’s also home to numerous peep shows, sex shops, and sex theatres, and the sex museum is quite a popular attraction too.

Apart from the sexual services in De Wallen there are other attractions too.

It was built around 1213 and also happens to be the oldest parish church in the city.

The original wooden church was built around and eventually replaced by the stone church you see here today.

As well as the sex museum, there is a cannabis museum in the Red Light District, and the neighbourhood has many bars, restaurants and coffeeshops.

If you know your beer you will probably know that Heineken is a Dutch brewer founded here in Amsterdam in 1864.

The first Heineken brewery was completed in 1867 and it produced millions of litres of beer up until a new, more modern facility was built on the outskirts of the city in 1988.

After closing the original became the Heineken Experience – a tour and visitor centre.

You can also see how a much smaller brewery works by visiting Brouwerij ‘t IJ (The IJ Brewery).

This small brewery was opened in 1985 and offers tours and tastings or there’s a pub where you can enjoy their five standard beers and four seasonal ones.

The brewery is right next to the De Gooyer windmill. 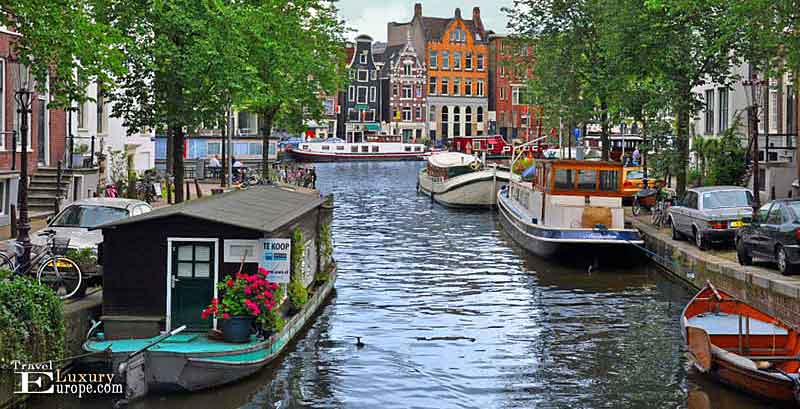 Experience the Bridges and Cruise on the Canals

The canals and bridges of the Netherlands’ capital city are by far the best known attraction, though by no means the only one.

Strolling around the historic heart of Amsterdam you’re treated to these canals in abundance as streets criss-cross over them, using one of the 1,500 or so different bridges, and then there’s the architecture.

Historic homes, shops and premises line the canals and it’s great that you can still see many of the original features such as the hoists on the exteriors, where business owners used to hoist their goods up from the canals or street.

As mentioned the architecture in Amsterdam is lovely, especially the historic buildings in the older parts of the city.

Just walking alongside one of the many canals you’re treated to an assortment of typical Dutch architecture.

The tall but narrow buildings are almost amusing in style with their many floors but narrow width!

There are numerous landmarks to look out for, both in the historic city, and outside;

The Dam, or Dam Square, is the main square in the city and a popular place for events and gatherings.

The large square measures approximately 200 by 100 metres and is home to one of Amsterdam’s top landmarks: the Royal Palace.

Built as the city hall between 1648 and 1655 it later became a royal residence and still today serves as one of three palaces in the country that is at the disposal of Queen Beatrix (King Willem-Alexander from April 30, 2013).

The palace is open to visitors and inside you can see some of the grand and beautiful interior which includes plenty of white marble and works of art by Dutch artists.

Also on Dam Square is the Nieuwe Kerk (New Church), which, despite the name, was actually completed in the 15th century.

The church is adjacent to the Royal Palace and is no longer used for services.

This church replaced the Oude Kerk (Old Church) which had become too small for the growing parish.

The Old Church itself is a well known landmark of Amsterdam too, not least because it is the city’s oldest building.

Other famous and notable landmarks include East India House, which was the headquarters of the powerful Dutch East India Company, and The Waag (Weigh House), which is an attractive 15th century building now housing a museum and café.

If you know Amsterdam a little better you’ll also know that it offers some excellent museums, not least the Rijksmuseum.

Anne Frank House is also extremely popular, and a must-visit museum that’s set right within the historic centre of the city.

There are many other museums too, focusing on different aspects of culture and life, and you can read more about the museums at the museum page Amsterdam Museums 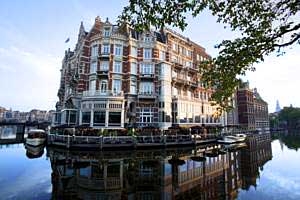 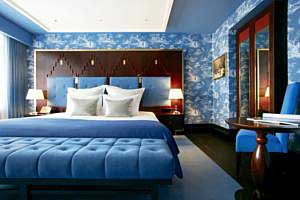 There are literally hundreds of hotels located across Amsterdam’s various districts but for tourists wanting to explore around the canals and historic centre you should look for a city centre location.

You can find hotels for all budgets – at the luxury end there are hotels like the fantastic, luxurious De ‘Europe Amsterdam; a 5 star hotel set on the Amstel River, and a 10 minute walk from Dam Square.

The Radisson Blu Hotel is also at the high-end. It’s a 4 star hotel situated in a quieter street, only 7 minutes walk to Dam Square.

The building has an historic, grand feel to the outside with modern guest rooms inside.

There are many great budget hotels too if you want to save your money for shopping and sightseeing, or opt for the middle range and choose one of a number of 3 star hotels, an overview here.

More from Amsterdam and The Netherlands