A big Celebration of the Madrid Patron Saint

The saint was particularly good at finding freshwater, so the festival focuses on water.

Just one of the many fascinating festival sights is the chulapas and chulapos dressed in traditional Madrid costumes drinking ‘the saint’s water’ from the spring next to the Shrine of San Isidro.

Tradition and modernity define the festival’s program of culture.

With over 200 concerts and cultural activities, there are free activities for the whole family to enjoy.

It takes place at Pradera de San Isidro, and other places across the city such as Plaza Mayor, Plaza de la Villa, and Las Vistillas.

You’ll have the chance to see many of Madrid’s famous sights as you take in all the festival has to offer.

There are also many traditional religious ceremonies held in Madrid during the Fiesta de San Isidro.

The festival begins with the colourful parade of traditional giants and big-headed dolls, followed by the opening speech at Plaza de la Villa.

Afterwards, these fantastic figures will stay on display at the Plaza de la Villa.

Chotis is a popular dance, originally from Bohemia, and you can catch performances at Las Vistillas Garden.

Other festival offerings include the Pottery Fair at Plaza de las Comendadoras and a light and sound show in El Retiro Park.

Donuts and lemonade are special treats available at the Fiesta de San Isidro.

But beware, the lemonade is not as innocuous as it sounds.

It is with wine, lemon, sugar, and diced fruit.

Doughnuts come in different flavours – there is a French one with almonds, the Santa Clara with a luscious layer of white meringue, and the ever-popular sugar-glazed doughnut.

You’ll be right in the midst of all the action when you stay at the Petit Palace Plaza Mayor.

The modern and stylish rooms have hydromassage showers, free WiFi, and a flat-screen TV.

Daily buffet breakfast and bicycles are available for use free of charge.

It’s a fantastic location right next to Plaza Mayor with a metro station just 200 m away.

Read more and check it out

If Petit Place Plaza Mayor is not available on the dates you’d like, then check out what else is available in Madrid here >>

It’s held right in the city centre during the height of summer.

Madrid is a city where you can enjoy fine dining as it’s not short of quality restaurants.

There are 20 restaurants with Michelin stars.

DiverXO is the only restaurant in Madrid with three Michelin stars.

If you’re a lover of fine dining, but your budget doesn’t stretch to the above, then you might like to try one of the 13 restaurants offering Michelin’s ‘Bib Gourmand’ – great food at affordable prices.

Madrid is the capital of Spain and the country’s largest city.

And then there’s the food – Spanish cuisine is renowned the world over, and Madrid has plenty of fantastic restaurants offering tempting dishes.

More things to do in Madrid 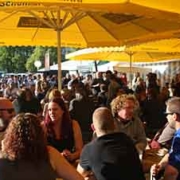 BOOK HOTEL FOR THIS EVENT Things to do in and around Bern - Sightseeings, Helicopter tours and more

Hotels: Overview of all hotels in Solothurn 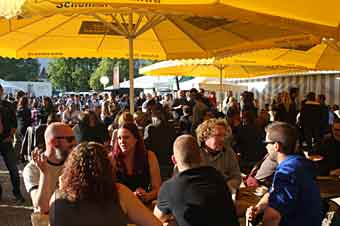 Solothurn Beer Days Festival is your chance to explore the Swiss beer culture in this atmospheric town located 45 kilometres from Bern.

More than 50 Swiss breweries are ready to quench your beer thirst at Rythalle Soledurn in Solothurn.

Think of a giant square circled by beer tents with more than 100 taps ready for your bidding, including food stalls offering the best local Swiss nosh you can imagine.

When you arrive at the Solothurn Hauptbahnhof (central station), the Rythalle is on the other side of the river Aare.

The venue can be reached on foot in about 10 minutes by crossing the Rötibrücke bridge.

So much to choose from in terms of regional food: sauerkraut, ham with potato salad, roast chicken, etc.

For something unique, head to the Wegglibeck Baranyai, which offers freshly baked pretzels filled to order.

Or, cheese lovers should go and greet Ignaz, who serves fresh raclette with warm potatoes and breadsticks on bread.

There is also Dani, who pairs his famous schnitzel bread with eggs.

Where to Stay – Hotel Tips 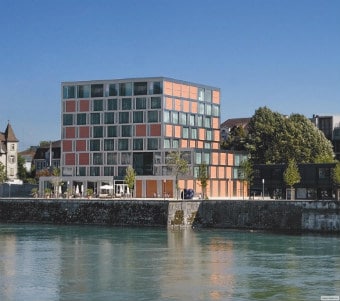 Newly built and right by the river!

A mere two-minutes walking distance from the central station and the old city centre.

The 7th floor is kitted up with a sauna, aromatic baths, experience showers, whirlpool, massage services and solarium.

More things to do in and around Bern

BOOK HOTEL FOR THIS EVENT THINGS TO DO IN LOIRE VALLEY

Due to the Covid-19 pandemic, the event may be postponed and even cancelled.

Check back at the organizers’ website closer to the event.

Held in the city Tours in the beautiful Loire Valley, an area synonymous with fine wine, Viti Loire promotes the region’s wines.

With over 150 wine producers present, there is an incredible diversity of offers and grape varieties to sample during the two days of the festival.

As well as the wine bars raising awareness of the traditional wines of this region, this festival features craft markets, cooking demonstrations from top chefs, and opportunities to learn about wine tasting.

You can also explore further afield on a walking or cycling tour through the region’s many wineries.

The Loire Valley is France’s premier wine region with over 70 AOC wines.

This is a French certification granted to regional French agricultural products such as wine, cheese, and butter.

A wide variety of wines are produced in the Loire Valley, and it is especially well-known for its dry whites such as Sancerre, Pouilly-Fumé, and Vouvray.

As a UNESCO World Heritage Site since 2000, it is recognised as an area of extraordinary cultural significance.

You’ll find the historic city of Tours, home to Viti Loire, right in the heart of the Valley.

Through the cobbled streets of the old district; Walk and explore the cathedrals, squares, half-timbered houses, and terraces of this town of art and history, culture and gastronomy.

In addition to visiting a winery or two, a visit to one of the region’s famous chateau is exciting.

Château de Chambord is one of the most inspiring with its distinctive French Renaissance architecture.

Around an hour away by train or car, Tours is easily accessible from Paris.

Train connections from Paris are frequent and fast.

If traveling by car from Paris, take the A10 motorway towards Bordeaux.

Things to do in Loire Valley

Right now we don’t find any information about any coming dates for the next festival.

A relative newcomer among the festivals, the London Wine Week is brought to you by the same team who bring you London Cocktail Week.

Hosted at venues across the capital, it offers a week filled with masterclasses, tutored tastings, supper clubs, meet the maker evenings, parties and pop-ups.

Check their website for the next dates and events.

“You find no man, at all intellectual, who is willing to leave London. No Sir, when a man is tired of London, he is tired of life, for there is in London all that life can afford.” This quote from the author, Samuel Johnson, says it all.

Even if you’ve been to London before, there is always more to see and do.

As the largest metropolitan area in Europe, London, with its world-class galleries, museums, theatre, parks, and other attractions, has something to suit all tastes.

More things to do in London

More from London and United Kingdom