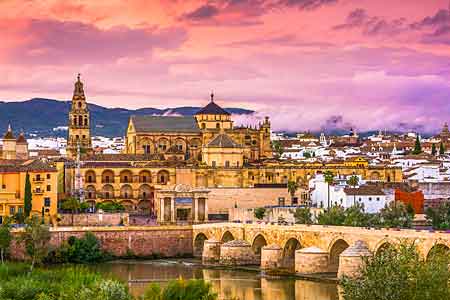 Situated in the region of Andalusia in the south of Spain, Cordoba was founded during the times of the Roman Empire.

By the beginning of the 11 th century, the city was already listed among the most flourishing cities of Europe.

It had a university, a library, and was one of the most important centers of Spanish education.

Today, the city is known primarily for its festivals.

Although, its historical heritage is also widely acknowledged: the Old Town of Cordoba is even listed among the UNESCO World Heritage Sites.

WHAT TO SEE AND DO IN CORDOBA 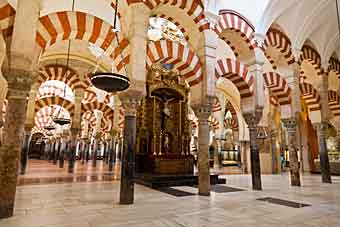 We recommend you start with the biggest and most popular attraction of Cordoba – La Mezquita.

Formerly a mosque, turned into a cathedral, this grandeur building is widely known for its numerous columns, topped with Islamic-style arches, striped in red and white.

Of course, the place has many other architectural highlights that reminds of the glory and importance the city held during the Medieval times.

The building is surprisingly well-preserved and full of stories – it will take you a couple of hours to explore.

If you go through one of the doors of La Mezquita, you’ll enter the Patio de Los Naranjos (The Court of Orange Trees).

The specialty of this garden is that orange trees are planted in symmetrical rows, duplicating the columns within La Mezquita.

There is a large fountain flowing its waters peacefully in the center of the court.

And the view of a bell tower, framed by orange trees, is great for photos.

Cordoba Old Town was claimed the UNESCO World Heritage Site for a reason.

There are plenty of magnificent historical sites and you can stroll within its narrow streets for hours, feeling a quiet breathe of history in your ears.

The Roman Bridge used to be the main crossing point over the Guadalquivir River and it proved the importance of Cordoba for the region.

Today, it’s a beautiful historical monument, marked by a triumphal arch at one side and an old fortified gate at the other.

Take a walk through the majestic narrow Calle de las Flores (Flower Street), with the fascinating cozy square at the end of it and a beautiful view of La Mezquita’s Tower.

Capilla de San Bartolome is a 15-century chapel, maintained by the University of Cordoba, where you will see some really beautiful tiles and vaulting.

Albolafia Water Mill is a reconstructed Moorish water wheel, the only one remaining in Spain.

Just 5 minutes away from the main square of Cordoba, there are ruins of ancient Roman temple, Templo Romano, which date back to the 1 st century A.D.

The place did not survive well over time, but it looks great at night with all of its lights and decorations.

To learn more about the Roman period of the city, head to the Archeological Museum of Cordoba, situated over the ruins of old Roman Amphitheater.

It allows visitors to walk directly through the ruins, as well as see some unique artifacts from the history of the city.

Have you ever walked through a street only 72 cm wide?

It is really just 72 cm wide at its narrowest point and leads to the smallest square in the world.

There are also a few places outside the Old Town, which you shouldn’t miss.

One of them is Plaza de Capuchinos (or Plaza del Cristo de los Faroles).

The best time to come here is at sunset or at night, when the Christ in the Cross statue is adorned with lots of lanterns, candles, and flowers.

It creates quite an atmosphere. And the place is situated not far from the Old Town.

Palacio de Viana, the former palace of the Marquise of Viana, is also an impressive building and an interesting museum.

It also has a fabulous garden with over 14 patios. 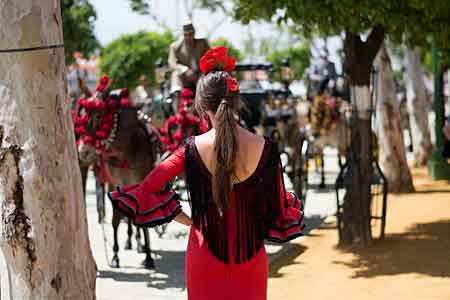 How to get to Cordoba

RENFE, Spanish high-speed rail network, operates comfortable and regular train rides to Cordoba from Madrid and other cities of Spain:

The city’s main railway station is situated only 15 minutes away by foot from the Old Town.

The bus station is also located nearby and operates bus routes to and from almost every town of the region, as well as Madrid.

The nearest airports are Madrid, Malaga, and Seville. From there, you can take a bus or a train to Cordoba.

Tips on good Hotels in Cordoba

You can find many good hotels to choose from in Cordoba.
Here are a couple of the best with good reviews from their visitors 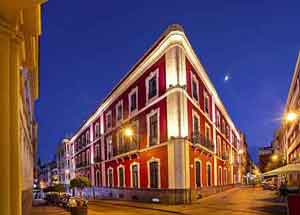 Eurostars Azahar – Situated only 1 kilometer away from La Mezquita and 200 meters away from the Roman Temple.

This 4-star hotel boasts some of the best reviews and a 9.4 rating on Booking.com.

Featuring a bar, a sauna, a gym, a car rental service, and a great room service, wheelchair accessible.

Eurostars Azahar will be a great choice if you prefer to stay in the very heart of Cordoba.

Free WiFi is available throughout the property and a buffet breakfast is served every morning.

All rooms feature air conditioning, which is essential for Spanish summer days.

You can get help with ticket reservations, airport transfers, or any other services you might need during your stay.

Guided tours and more things to do in Cordoba