The lovely Rugen Island in Germany

Rügen in Germany offers a paradise-like setting on the Baltic Sea with spectacular scenery, beech and white chalk cliffs.

The seaside resorts of Binz, Sellin and Göhren attract many visitors with their incredibly fine sandy beaches and charming seaside resort architecture, offering scenery unlike any you would expect to find in northern Germany.

Rugen is actually an island, set just off the mainland of Germany and the Pomeranian coast.

There are several great spa hotels here that have really good service, making this an enjoyable and relaxing holiday island.

It’s not surprising that Rugen has become one of the biggest tourist magnets in Germany.

Rugen has lots to see, but among the most famous and popular attractions are the following:
Nature Reserve Granitz and Hunting Lodge “Die Jagdsloss” has a scenic beech forest with hiking trails and bike paths.

In fact, the entire island is very bike-friendly, so great for anyone who enjoy cycling.

Cape Arkona and Kings Chair is grand and beautiful with its white chalk cliffs.

The most mentioned and famous historical attraction is the big buildings at the beach resort Prora.

Often called the “Colossus of Prora”.

This planned resort was built by Hitler and although the eight identical buildings were never actually used by tourists it was planned to be a huge holiday resort for the German people.

The steam locomotive, Rasender Roland, runs between the beach resorts, providing a practical solution for anyone who does not cycle or is tired of walking after a day’s sightseeing.

The train’s whistle is a familiar sound on Rugen! 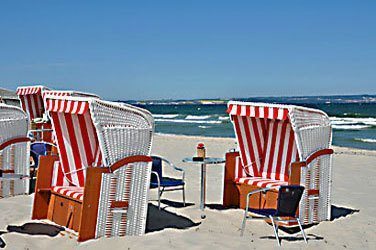 The beaches around the island, and especially those with beach resorts, are worth seeing, and last but not least the Pier of Sellin with its cozy restaurant.

Lots of exciting events on the island this year, including the yearly Blues and Jazz festival “Blue Wave” and the medieval “Störtebecker Festival” going on whole summer.

Have a look at the Events Page!

Fun for the whole family at Dinosaur Land

One attraction that’s really quite different to the rest is Dinosaur Land and it’s been entertaining families since it opened 30 April 2009.

Located in the village of Glowe the park features life-size dinosaur display models and there are now around 120 exhibits to see.

Also if you’re travelling with children there is also a popular water park in Sellin that can be fun to visit.

The greatest spa hotel in Binz is famous for its history with high society and authorities spending lot of time here.

You can read more of this exciting history and about more nice spa hotels on the spa page. 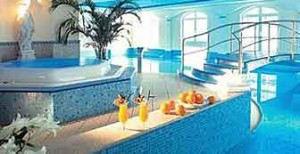 Looking for a Spa and Gourmet Cuisine ?

Then Rugen is the right place! Relax with a spa and enjoy life in one of Rügen’s many luxury hotels.

Be early if you want accommodation in summer

If you come on weekends and in June, July August, you better book early in advance.

An overview of all hotels here >>

Especially in the resorts of Binz, Babe, Sellin and Göhren, they sell out very quick.

Moreover, the earlier you book, you often get a better price.

Many people book almost a year in advance to get their favorite beach-hotel.

Overview of all Hotels on Rugen Here

Ferries between Scandinavia and Rugen

The shortest and fastest route to Rugen from Scandinavia is the Stena Line ferry from Trelleborg to Sassnitz, or alternatively through Denmark with ferries Helsingborg – Helsingor and then Rodby – Putgarden with Scandlines.

Being from Scandinavia, the cost of the trip was easily made up for by the cheap shopping in Bergen, Sassnitz and Putgarden.