A small town with 35.000 inhabitants, tucked away on a plateau surrounded by ragged mountains.

Reachable only by a winding road with a sheer drop on one side and cliffs  on the other.

Writers, painters, singers and countless less famous visitors have been attracted to and inspired by Ronda. 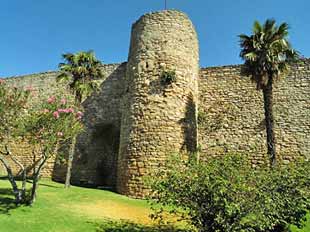 Ronda is a town for walking. Having safely negotiated the many twists and turns of the access road, leave your car at the petrol station and enter the Old Town through a gate in the remains of the Arab city wall.

Like all of the south of Spain, this village fell into Moorish hands in 735 and remained under various Arab rulers until the Reyes Catolicos, Isabel and Ferdinand, re-conquered their kingdom in 1485.

A long time of a very different culture which has left many marks here, among them the impressive city wall. 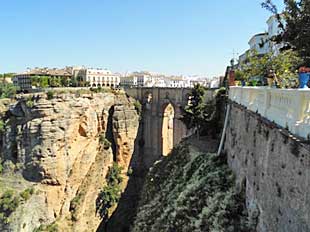 What really leaves you breathless though, is El Tajo, a huge gorge or canyon formed by the river Guadalquin which separates the Old Town from the New Town.

Both parts are connected by the New Bridge which you have to cross to get from one part to another.

The best view of the bridge and tajo is from Casa de Don Bosco, a wonderful 20th century mansion located in the Old Town.

Famous for its tiled patio, carpets, fireplace and collection of period furniture, the true secret is the garden with a fountain where stone frogs spout water and where you can hang over a wrought iron banister and get the full panorama of canyon and bridge.

Before reaching Casa Bosco though, you´ll have passed through the leafy Plaza de Duquesa de Parcent which was the centre of social activities and bullfights before Spain´s oldest bullring was built in 1785.

The park is bordered on one side by the church Santa Maria Mayor.

It’s a curiosity because the bell tower is shaped like the minaret it once was.

The side of the church has outside balconies to accommodate nobles and the royal family when they wanted to watch the bullfights and fiestas.

From there just amble along the cobble stoned streets of the Old Town and you´ll reach the wine museum.

Here you can taste wine or climb up to the first floor which is a museum.

It is exhibiting wine making and storing paraphernalia as well as a collection of traditional clothes.

Then, walk over the New bridge, take a peek at the remains of a much older Moorish bridge and end up at the bullring. 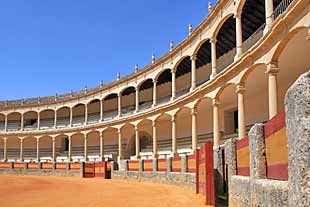 Ronda and the history of Spanish bullfight are inseparable.

It was Pedro Romero who invented bull fighting on foot and did so for the first time in 1785, wearing “trajes de luz” adapted from paintings by Goya.

Each year in August / September, Ronda lives the “Feria Goyesca” to commemorate the event.

It´s a social event of the highest order, with celebrities from all over the world flogging to Ronda, often by private helicopter, to watch their favourite matador and to dress up in Goyesca clothes themselves.

The video with Madonna, Take a Bow, was made here.

The plaza de toros was put to a less bloody use when Madonna shot her video “Take a Bow” there.
Hemingway and Orson Welles of course are closely connected to the bullfight. 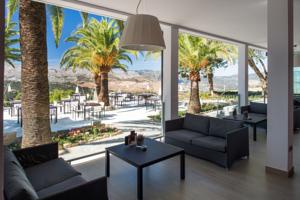 Today it´s a 5 star hotel and spa but Rilke´s room is preserved as a mini museum.