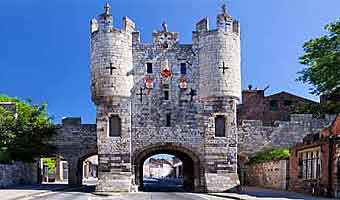 A walled city in the North of England which is steeped in history.

York was founded in 71 AD by the Romans it was called Eboracum,

Vikings called it Jorvik and the Saxons Eoforwick.

York is the capital city of the largest county in England, Yorkshire, and lies on the main East Coast railway line between London and Edinburgh, Scotland.

Within its walls, on which you can still walk in many places, are many museums and places of interest which denote the history of the city.

If arriving by train you will arrive in a station originally built in 1839 with the present structure opened in 1877.

Attached to the station is the National Railway Museum, with free entry, the largest railway museum in the world with just under 300 rail vehicles on display. 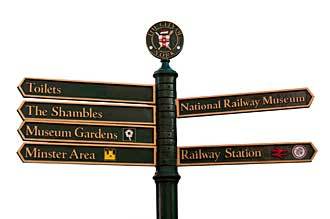 The main shopping area contains many individual shops as well as a lot of chain stores, where all tastes are catered for.

Visit the speciality shops in Stonegate and the Shambles to buy individual gifts in shops which specialize in stamp and coin collection, home-made chocolate and sweets, or bakers purveying traditionally prepared cakes and pies.

The Shambles was first mentioned in the Doomsday book and still contains some 14th and 15th century buildings where the upper stories overhang street level. There are daily markets beside this area. 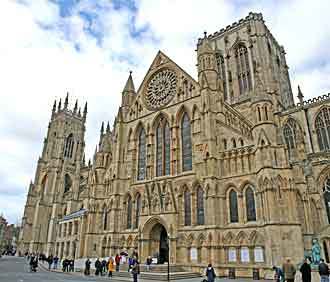 The main touristic attractions are all within the walls.

They include the Minster, the Jorvik Centre, York Castle Museum and Clifford’s Tower.

The Minster is a fine Gothic cathedral, built where there was originally a wooden Christian Church in 627AD.

The word “Minster” denotes that it was formerly a centre for Christian learning, and the Bishop of York is considered to be the second most important position in the English Church.

Visit their website with tips on guided tours and what to see and do YorkMinister.org.

The Jorvik Centre is an underground experience in the centre of the city.

It is situated on a site where digging first began in 1976 and has found, so far, over 15,000 objects dating back to the time that the Vikings ruled the area.

You are transported in carriages through a reconstruction of what life was like in Viking Jorvik over 1,000 years ago with animated models and smells.

The Castle museum shows what life was like in Georgian and Victorian York.

Particularly interesting is Kirkgate which shows a Victorian street of shops and a school.

There is also the Debter’s Prison. 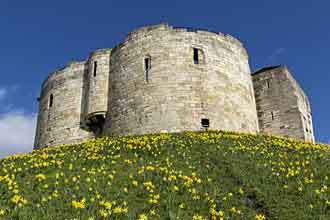 Outside the museum is Clifford’s Tower, all that is left of York Castle, originally built after William the Conqueror snatched the throne of England.

The tower has served as a prison and a royal mint and is set on top of a high mound of earth.

Chocolate making has for many years been part of York’s manufacturing industry with both Rowntrees ( with Kit-Kat, Smarties and Aero) and Terry’s (with Choc Oranges and All Gold) having their headquarters here.

The Chocolate Story, very near to The Shambles, is a tourist attraction that takes visitors through chocolate making from its beginnings to the present day.

Check out the Chocolate tour here >>

Other exciting things in York

There are often exhibitions and fairs in Knavemire just outside the city walls, where horse racing is held between May and October, including the famous Ebor handicap.

Farmers markets are also held in the city centre on the last Friday of the month.

Ghost Walk and the Dungeon

A famous guided tour is the Ghost Walk where Victorian dressed guides will take you to visit various buildings around the town including the most haunted, at 35 Stonegate, a building over 700 years old.

If you like this, you should visit The York Dungeon tour

Hop on Hop off city tour

A great way to see all attractions is to go with the City Hop-on Hop-off Tour.

There are so many visitor attractions in York you will want to return again and again.

Buy the York Pass, a 2 day pass which gives heavily discounted entry to over 30 attractions and discount shopping vouchers.

If you wish to return at some time in the future, many of York’s attractions allow free return entry for a year if you keep your entry ticket, allowing you extra time to explore.

A major attraction in 2014 is cycling where on Sunday 6th July the second stage of the Tour de France starts in the center of York travelling to Sheffield.

Book your visit early to see this spectacular occasion which is famous throughout the world.

A big Viking festival is held annually in February, the Jorvik Viking Festival.

As mentioned earlier, Jorvik was the Vikings name of York.

It is one of the largest of its kind in Europe.

You can read more about it here >>

More things to do in Yorkshire