The small town Villefranche-sur-Mer is just west of Nice so if you stay in this town you get the best of both worlds – easy access to the city of Nice, yet a quieter atmosphere.

Its bay is one of the deepest in the world so it’s often frequented by some of the world’s largest cruise liners, though be aware that when a cruise ship is docked the small town can get very crowded!

Even so, Villefranche-sur-Mer beats Nice for its nice coarse sandy beach, and it has some excellent restaurants and nice shopping.

Attractions in the city 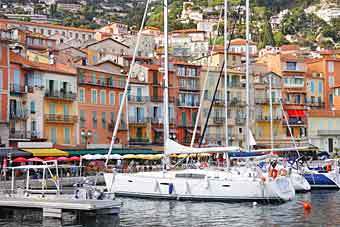 The old harbour and old town are among the most popular attractions. Being relatively small the old town is easy to explore on foot.

It and the harbour haven’t changed much over the last couple of hundred years so there’s a great atmosphere to enjoy here among the historic buildings. 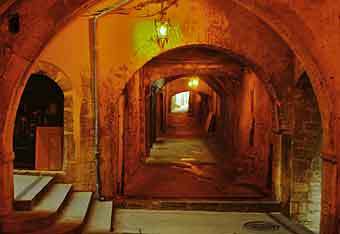 Dark Street (Rue Obscure)  is a ppecific landmarks to look out for, which is a passageway under the harbor front houses and dates back to 1260.

The Citadel, built in 1557, serves as the town hall and inside there are several museums to visit too.

Villa Leopold is located in the hills above Villefranche-sur-Mer and it’s been known as the most expensive house in the world.

It was once the home of King Leopold II of Belgium. 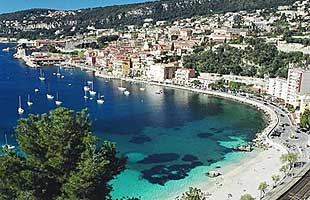 And then there’s the beach – a natural crescent shape with course sand that easily beats the hard pebbles you’ll find on Nice’s beach.

Being so close to Nice has its advantages – getting to Villefranche-sur-Mer is quick and easy from the Nice Cote d’Azur Airport which is just 15 kilometres (9 miles) to the west.

You’d have to drive through Nice from the airport, but it’s a very nice drive along the seafront and a good way of checking out some of the sights of Nice along the way.

Though it’s only a small town Villefranche-sur-Mer actually has the most visited cruise ship port of call in France so there will always been cruise ships coming and going. There’s still room for smaller luxury yachts as well though, so you could plan to arrive in style on a yacht charter too!

Many hundreds of hotels to choose from in the neighboring city of Nice but you can easily stay right here in Villefranche-sur-Mer too.

We found a great 4 star hotel,  Welcome Hotel  which is on the waterfront right by the center of town and has many rooms overlooking the scenic Cap Ferrat Bay.

There are several very good 3 star hotels in Villefranche-sur-Mer too, in addition to a few more basic 2 star offerings.

If you can’t find one that appeals, try hotels in Nice instead.

An overview of hotels in Villefranche sur Mer >> 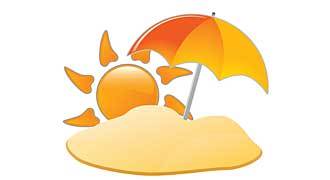 The climate of Villefranche-sur-Mer is very much the same as Nice, which, in short, is warm and sunny.

You’ll find the hottest temperatures are in July and August and across the year you can expect around 2,700 hours of sunshine, even in the usually grayer winter months of the year.

Menton - the pearl of the French Riviera

Zermatt in Switzerland, home of the Matterhorn

The beautiful city Nice on the French Riviera

Monaco - Lots to see and do in this luxury city

Wellness and Spa on Rugen

Antibes on the beautiful French Riviera

Tips on some Luxury Hotels in Barcelona 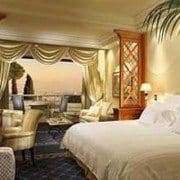