Provins, an exciting medieval town not far from Paris

If you’ve never heard of Provins, you’re in good company.

Even the most savvy of seasoned travellers to the Champagne region of France might not find it in any standard guidebook.

But it’s a destination you must not miss if you’re in the Île-de-France region.

This delightful medieval village is a UNESCO World Heritage Site.

It has more than fifty listed monuments showing off the expertise of architects, carpenters, stone masons and other craftsmen of the Middle Ages. 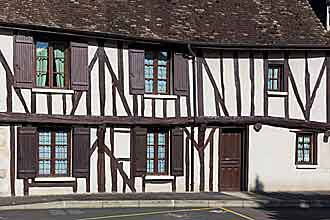 With ramparts and fortified gates, subterranean passages and the highlights of Caesar’s tower and the magnificent Saint-Quiriace church, Provins is a Mecca for those fascinated by times past. 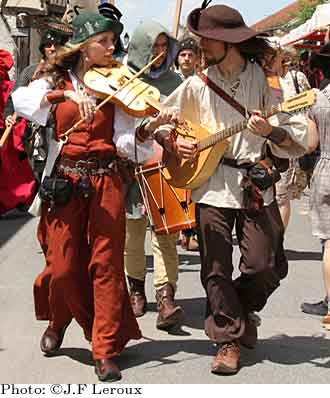 Cultural heritage of Provins and the June Medieval Festival

Provins was famed for its troubadours, a literary legacy that continues.

Victor Hugo, Honoré de Balzac, Marcel Proust and Umberto Eco have all passed through Provins and evoked its charm in words.

Medieval life here was not all clashes and conflicts – Provins also became a centre of intellectual and artistic life.

Provins rings with the sound of musical events and street performance in June when the town holds its most fascinating festival,  “Les Médiévales de Provins”.

Provins as a day trip from Paris

It’s hard to imagine being tired of Paris, but if the glamour of the City of Light has left you longing for lower-key pleasures, Provins is an unbeatable day-trip destination, and less than 80 km from the capital.

No need for a car – it’s an easy train ride, leaving every hour from Gare De L’Est.

The trip takes around an hour and a half, through the lovely landscape of Île-de-France.

It’s a bit of an uphill walk from Provins station to the centre of town, but in around fifteen minutes you’re in the picturesque cobble-stoned main square, where there are cafes and restaurants for a reviving stop. 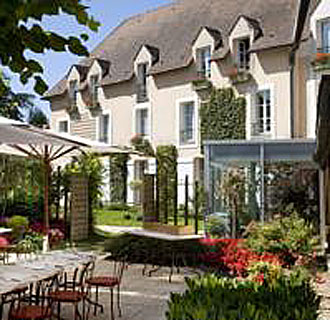 L’Esquisse restaurant is among the most charming, on the pretty Rue Couverte in the Upper Town.

It belong to the hotel Aux Vieux Remparts that has bright pleasant room and delectable comfort.

You could linger over lunch on the lovely flower-filled patio, and still have time for a saunter around the streets and perhaps for the afternoon falconry show up on the ramparts.

You could even buy a hand woven basket to transport your purchases back to your Paris hotel.

A two-centre holiday in Paris and Provins might just make the perfect romantic combination.

At nightfall in summer, a thousand candles light the streets, and musicians are on every corner.

It offers cosy bistros for dining à deux with your loved one, and some sumptuous places to stay. 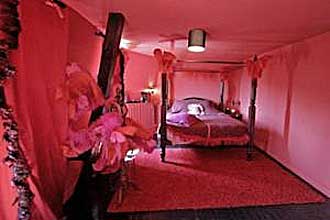 Maison d’hôtes Stella Cadente is a stylish guest house designed by a Paris fashionista, with just five guest rooms, each decorated around a fantasy theme. 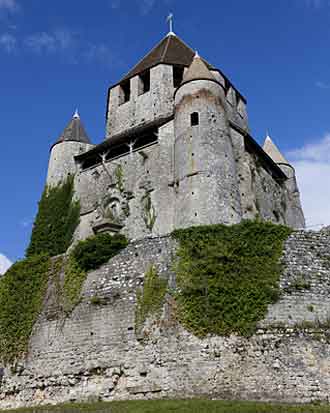 A potted history of Provins

Provins, is one of the towns where medieval fairs were held in the reign of the Counts of Champagne, from the 11th. to the 14th. century.

Divided into an Upper Town and a Lower Town, the “Châtel” (Castel) and the “Val” (Valley), and protected by imposing ramparts, Provins built its prosperity through trade fairs.

Merchants from all over Europe and the Orient flocked to do business in its streets and squares. The town even minted its own coinage, the denier provinois (Provins’ penny).

The height of its fame was during the reign of Thibaud IV of Champagne, who took part in several sieges and crusades.

Thibaut was both warrior and poet, and Provins inherited his dual influence as a centre for both warfare and culture.

The twelfth century Tour de César symbolises the power of the French aristocracy – an impressive and unique structure that has served as a place of refuge, a watchtower, and a dungeon for those who displeased the Counts.

Climb to the top for a bird’s eye view of the town – although there’s a charge for entry, these days once you’ve taken the tour, they definitely let you out again.

Jousting, hand to hand combat between goodies and baddies, some quirky exhibitions and a labyrinth of ancient subterranean passages – Provins has plenty to please every generation.

The Provins tunnels will fascinate any family member apart from the claustrophobic.

Even finding this world below your feet is a bit of an adventure. 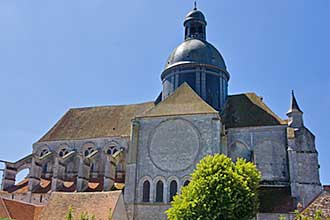 Visit Saint-Quiriace church, and nearby you can get a guided tour of the underground world.

It’s chilly, even in the middle of summer, so don’t forget to take along an extra layer for warmth.

The tunnels are dimly lit, steep and shrouded in mystery.

Entertainment and fun at the medieval banquet

Book up for an evening at Le Banquet des Troubadours, on Rue Saint Thibault.

A medieval banquet for everyone from children to grandparents.

You can hire costumes if you want to dress up to a medieval look.

Jesters and jugglers provide entertainment, and the food is based on authentic medieval fare.

It’s unsophisticated, but tasty and enough to satisfy hearty appetites – more a typical tavern meal than a feast served up for the Provins Counts.

As with most events in Provins, a little French goes a long way towards making the most of the commentary.