Undoubtedly Pisa is best known as the home of the Leaning Tower, and when you visit this city in Tuscany this is one landmark not to be missed.

It is situated at the junction of two rivers, the Arno and the Serchio, just a short way inland from the Tyrrhenian Sea and it became an important port city.

The town reaches its peak in power and wealth during the 11th century and it was during this time that construction of some of the city’s greatest landmarks was commenced.

Pisa’s International Airport is actually the main air gateway for the whole of Tuscany so it’s well linked with the rest of Europe, making it easily accessible by air.

A number of airlines fly here year-round, and these are supplemented by seasonal flights too.

Admittedly there is just one option if you’re flying from outside of Europe; Delta Air Lines has a direct flight to Pisa from New York JFK during the peak season.

If you’re flying from elsewhere there are flights to Pisa from major cities like London, Rome, Amsterdam, and Paris, giving you many options for connections with airlines like British Airways, Alitalia, Air France, and EasyJet.

There is a railway station right at the airport, so travelling on to other parts of Tuscany is convenient from here.

The airport is only just on the near outskirts of the city so the journey into central Pisa is quick and affordable by bus, train, or taxi.

There are over 100 hotels to choose from, with the majority of them being 3 star rated or below. If you prefer to stay in style though, don’t worry, Pisa does also have a couple of 5 star hotels and nine 4 star hotels. 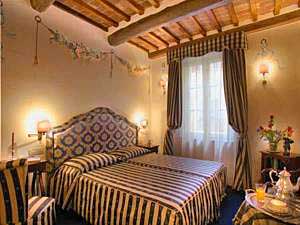 This is probably what you would imagine all hotels in Pisa to look like – old world charm with period furnishings yet the modern day comforts such as air conditioning provided.

It’s set within a restored 14th century mansion, and is in a great location, just 200 metres from the Leaning Tower of Pisa.

The classic, standard double and single rooms are a bit small, so be sure to choose the room that suits you best. 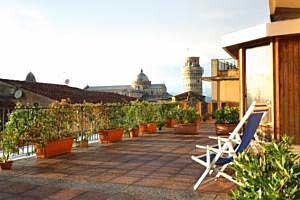 Grand Hotel Duomo lives up to its name as a grand and inviting high-end hotel. It may be rated 4 star but it has a different charm to Hotel Relais Dell-Orologio.

This one was built in the 1960s and is only a 2 minute walk from the Leaning Tower and Duomo Square.

Being close to the coast Pisa does not get quite as hot as some parts of Tuscany – the winds from the sea help to cool the city by a few degrees and this is usually a welcome break when sightseeing!

July and August see the warmest temperatures in average, with an average high of 29.5C both months.

June is a little more comfortable with an average high of 26C, and although September is pleasant heat-wise, it does get considerably wetter from September through to November.

Winters are cool and damp so not a great time for sightseeing, but from May it becomes warm and drier. 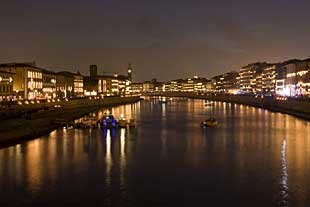 If you’re planning a visit for June you may want to coincide with two of the city’s festivals.

The Luminara Festival takes place on June 16 and is very beautiful with more than 10,000 candles lit along the banks of the Arno, and the evening ends with a huge fireworks display.

Later in June (the last Sunday of the month) is the Game of Bridge in which the two sides of the city compete over the Ponte di Mezzo (the main bridge in Pisa) by trying to push each side off the bridge.

Yes, the Leaning Tower of Pisa is by far the city’s best known and loved landmark, but if you thought this was all that Pisa had to offer, think again!

There are museums too, and not to mention the many restaurants where you can sample some of Tuscany’s excellent cuisine.

The city does actually have a number of other historical landmarks including more than 20 historic churches, palaces and bridges, and if you’re inclined to enjoy medieval Italian architecture then you’re going to find several days are filled wandering around the city’s streets. 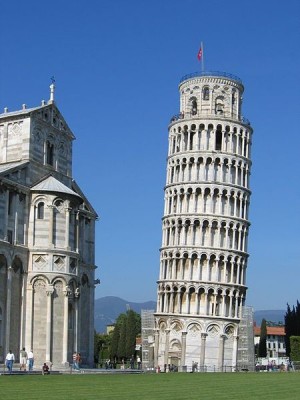 Let’s start with the Leaning Tower. It’s the landmark that everybody heads to first, wondering if it really does lean as much as it appears to all the photos.

And the answer is ‘yes’! Right now the tower is leaning by about 3.99 degrees.

This in itself is quite a lot for a building of this size and height, but it’s actually less than it has been in the past because of efforts made to strengthen and straighten it.

Previous to recent restoration work the angle was 5.5 degrees.

So, why the lean anyway? Well this campanile – the bell tower of the cathedral – wasn’t supposed to lean.

The lean has always been there though, appearing early on in the construction of the tower because the foundations were too soft to support its weight.

As the tower grew taller the tilt got worse but without the technology hundreds of years ago (it was built between 1173 and 1372) they could not perform the ground work necessary to stop it from tilting.

Now work has been completed the tower should be stabilised to stop it from leaning any further.

There are nearly 300 steps to the top of the tower, and yes, you can climb them.

The novelty of climbing is quite an attraction, but the views from the top are well worth the climb too.

Tickets need to be reserved in advance. See the Website for all details. 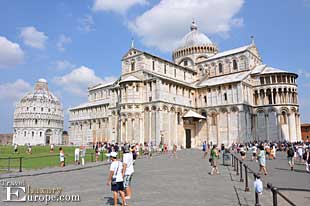 The Leaning Tower is one of the four buildings on Pisa’s main square, named Piazza del Duomo, or Piazza dei Miracoli.

The whole square has been designated a World Heritage Site as it is recognised as one of the main centres of medieval art in the world, and the buildings, in addition to the Leaning Tower, include the Duomo (cathedral), the Baptistery, and the Camposanto.

The cathedral is at the heart of the square and was built from 1063. It’s a vast creation with beautiful floors and ceilings, artworks, and mosaics.

The Baptistery is the round building on the opposite side of the cathedral to the leaning tower and is the largest of its kind in Italy, and then there is the Camposanto, the ‘monumental cemetery’, claimed by many to be the most beautiful cemetery in the world.

Elsewhere in Pisa sights include the Medici Palace and the Royal Palace.

Be sure to visit some of the city’s museums too, some of which are set within the old palaces.