The Medieval town Toledo in Spain

If you really want to experience the magic, visit Toledo, also known as The Imperial City at sunset.

Two medieval bridges cross the river and on the left rises the 16th century Alcazar whereas on the right the spires and towers of the cathedral are silhouetted against the sinking sun.

To complete the ´movie set ´both buildings and the narrow streets and houses below are illuminated.

Things to see and do in Toledo 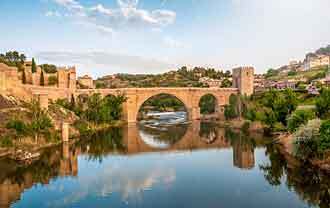 Toledo, located approx. 70km south of Madrid is a town with a long history.

It flourished during Roman times, followed by the Visigoths, the Caliphate of Cordoba and the conquest by Alfonso VI of Castile in 1065.

Each and every culture left its marks and well preserved buildings but the majority date from the Middle Ages and the Renaissance. 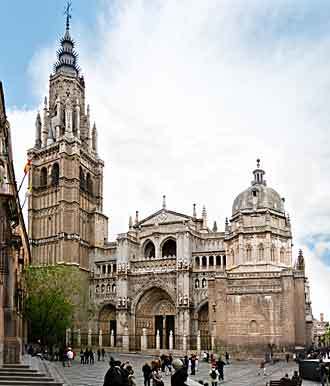 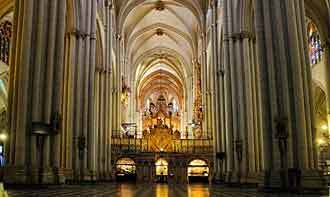 The Alcazar opposite was the seat of the royal court until it was moved frist to Valladolid and later to Madrid.

Tolerance and peaceful coexistence between Christians, Muslims and Jews was a prominent feature of the culture here until the Jews were expelled from Spain. During the ´good times´ Toledo was also a center for learning and translations. 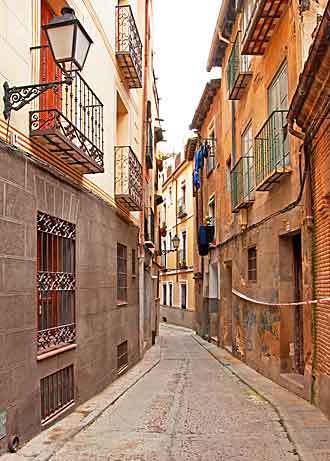 Dive into history by walking the steep cobblestone streets of the Old Town.

In fact, many are so narrow that a car can hardly pass and, as my taxi driver laughingly explained, nobody has a side mirror anymore and nobody bothers to repair dents and scratches.

At every twist and turn you come across archways, churches, monasteries and medieval town houses.

Many of them have been converted into boutique hotels with a unique charm but all modern amenities as well as cafes, restaurants and shops.

Since 500 BC Toledo was famous for the production of the finest swords and weapons, a craft which extends to the present day, although today the products are less lethal.

You’ll come across several work shops and can observe the artists crafting the distinctive black and gold objects, plates, jewelry and decorative knifes which are sought after souvenirs.

Festivals in Toledo and nearby

Just 60 kilometers from Toledo, in Consuegra, is a special festival last week of October every year.

It’s the Rose of Saffron Festival, and can be worth a visit if you come here in late October.

In August they also have their Medieval Festival in Consuegra. 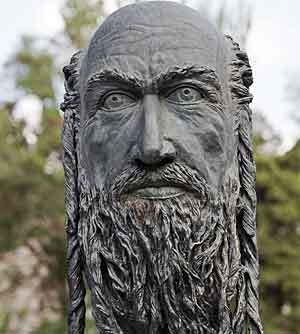 He lived and worked in Toledo until his death on 7th April 1614. 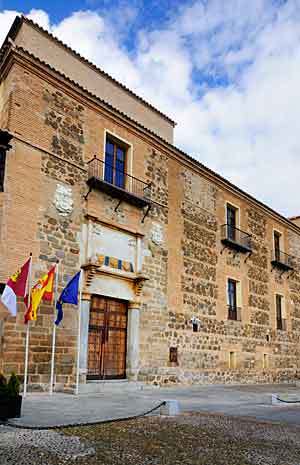 Works of art from all over the world have come to Toledo on loan and are exhibited in the reconstruction of the master´s house and other museums.

Visit the website of El Greco Foundation – More than 350 images of paintings, slideshow, biography and more!

Places to stay in Toledo 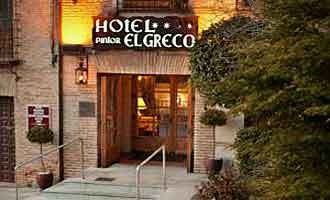 Of course it must be a hotel named El Greco here, and it’s in a building from the 17th century, only some footsteps from the El Greco Museum. 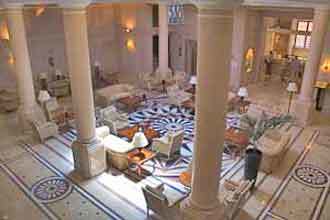 Stay in a former palace

As mentioned earlier, many of the old buildings and palaces have been converted to hotels. The former palace of the Empress Eugenia de Montijo offers style and comfort in Hotel Fontecruz 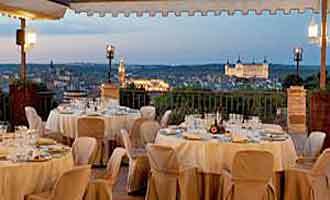 Hotel with a wonderful view

An other tips is Kris Domenico with amazing view over Toledo.

It’s 3 kilometers from the center, but the view and hotel standard can be worth it.

Lots more great places to stay in a wide range of budget, and even the luxury hotels are cheaper here than in larger cities.

So check it out and find something that suits you when you’re ready to enjoy Toledo.

Tours and more things to see and do in Toledo