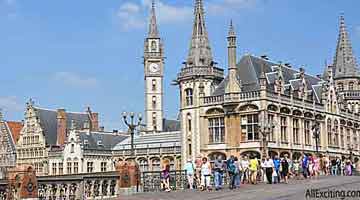 With nearly 1400 years of history, Belgium’s town of Ghent has a lot to offer in terms of tourism because nowhere else you’ll find so much history per square meter in Europe like here.

Ghent indeed was really important centre between year 1000 and year 1500 – it was even bigger than London and up to 1302 ruled by city families who were very successful in trading.

Its history was full of upsides and downsides, but despite it all, in the 19th century it became Europe’s first large industrial centre. In 1913 it was a host of the World Exhibition.

Probably the most famous landmark of this amazing city is St. Bavo’s Cathedral, where Charles V was baptized in the year 1500.

It is home to really impressive art pieces, including famous Adoration of the Mystic Lamb by Hubert and Jan van Eyck.

Cathedral is under restoration since 2013, and it’ll show itself in a fresh look after 4 years of intensive work.

The Castle of the Counts

Except this cathedral, Ghent is well known for beautiful castles and fortresses, and Gravensteen – is surely among the most beautiful one in the city and the whole country, as well.

It is the castle of the Counts, with a very interesting history. The place was fortified by Arnulf I making a medieval bastion made of a central wooden building accompanied with other buildings, also made of wood.

In 11th century, wooden parts were replaced with stone. During the centuries, from a centre of a whole region, the Gravensteen lost its function of administrative center of the region.

In 1865 Belgium and the city of Gent started buying the buildings and in 1893 restorations began. The architect was Jozef De Waele and in 1907 Gravensteen once again showed itself to public.

This is the city that is perfectly combining styles from different periods of history, and the best example is the STAM – city museum of Gent – settled in the abbey from the 14th century, with monastery from the 17th century and the 21st century contemporary look.

It is a home of pieces that are giving an insight in city’s past, present and future. Interesting detail are LEGO towers.

Discover the city by boat

The best way to explore the city that is full of waterways is always by boat.

Ghent offer: De bootjes van Gent (a window to a thousand years of architecture), Gent Watertoerist (an historic round trip), Rederij De Gentenaer (inland waterways) and a “boat in Ghent” where your guide is your captain with different thematic offers of their tours.

Last one added is natural tour where you’ll find out everything about the flora and fauna of the city. There are also tours that include picnics!

When we are talking about canals in here, we’ll mention bridges, but not all of them – one in particular – St Michael’s Bridge, with an amazing view of the city.

If you are wondering where to stay when you are coming to this town, our suggestion is to find a hotel anywhere close to the Patershol – the medieval center of the city.

An exhibition space – the Friary of the Calced Carmelites from early 1300s is a famous landmark of the Patershol, and this area is today among most desirable parts of the city to live in.

It’s full of restaurants and a true paradise for tourists.

Gent is a perfect choice for those who enjoy stunning looking architectural cities in Europe.

It is a place for relaxation and a place where you’ll discover hidden alleys or green spots all across the city.

Gent is astonishing, beautiful and exciting!

By air and by train – after landing in Brussels, take a train to Gent St-Pieters station.

Except Brussels’ airport, you can also land in other nearby airports such the ones in Antwerp, Ostend or Liege.

If you would like to come by car, there are two big highways: E17 (that goes from Lisbon through Paris, Ghent to Copenhagen and Stockholm) and E40 (that connects Calais, Gent with Brussels, Frankfurt, Vienna and Budapest).

Things to do in Ghent

Festivals and more from Belgum