The heritage of horse breeding culminates in the annual festival of the horses, Feria del Caballo, celebrated in Jerez every year in May.

Although fairs have taken place in Jerez since the Middle Ages, it was the Domecq family of sherry fame, which initiated the fair in 1955 as it is today.

The vast Gonzalez Hontoria Park is the venue where shows and parades are staged on a daily basis.

During Feria del Caballo you can watch cowboy and classical dressage, riding competitions and polo, but the highlight is the parade of carriages, also known as enganches.

English, Hungarian, Russian and Spanish style carriages, richly decorated, are paraded around the park and the along the streets.

Culminating in the so-called carousel where the carriages and horses which draw them, turn in unison and choreographed circles.

A master piece of horsemanship and an unforgettable spectacle accompanied by the sound of cracking whips and jingling bells.

More than 200 casitas or little stalls offering great food, and of course sherry and fino, liven up the festive atmosphere.

Not only a show for professionals and breeders.

Gypsies used to come to town to entertain people with their horse tricks for money.

Today they are scarce, but everybody who can get hold of a horse and a traditional outfit, joins in the parade.

Jerez is also the seat of the Royal Andalusian School of Equestrian Art and every Tuesday and Thursday you can watch a performance of a veritable display of dancing horses.

Moreover, the splendid 19th century Palacio de las Cadenas holds a museum of everything to do with horses.

Reserve a week in May to experience a festival which could not be more Spanish in style.

This city is located half way between the sea and the mountains in the Province of Cadiz/Andalucia,

It is famous for two things: sherry and horses.

Horses have been bred in the south of Spain for ages.

First for the military and now for sport and dressage.

There are over 50 accommodations in Jerez de la Frontera.

Many nice hotels with spa and beautiful surroundings.

You can chose among Hotels , Apartments , Guest houses , Bed and Breakfast

Prices are very high in Jerez de la Frontera during Feria de Caballo, so a good option is to stay in Cadiz and have your hotel there and you will explore an other nice city at the same time.

From Cadiz you get to Jerez de la Frontera by train in just 31 – 45 minutes.

Check when last train goes back so you don’t miss it. 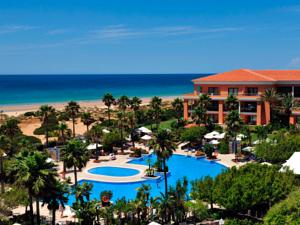 If you prefer to stay by the beach and take daytrips from there, we can recommend Hipotels Barrosa Palace & Spa in Novo Sancti Petri, just 35 kilometers from Jerez de la Frontera.