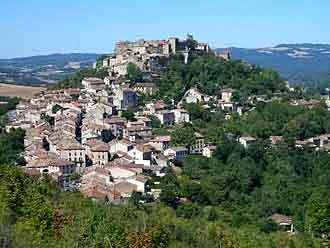 Cordes sur Ciel is situated above the Cerou valley in France.

It is the first and largest of the “bastides” or new walled towns.

A city with a charm, exciting history and great events.

From the history of Cordes

Cordes throughout the history grew quite rapidly, and by the end of the thirteen century  it had more than 5500 inhabitants.

A true industrial, commercial and financial center of the area.

This walled city is often regarded as the stronghold of the Albigensians, at one point was a favorite place of the Huguenots.

Unfortunately the population was reduced by epidemics of plague in 14th century, and the events that reduced the importance of the trade and commerce.

It reduced Cordes sur Ciel to only 2500 inhabitants by the 17th century.

In last two hundred years, the village gained some of the importance that it had in earlier history, but in an other area – tourism.

With the artistic revival that was followed by a group of artists who came to the city.

It all happened during the WWII, when artists gathered around the painter Yves Brayer decided to awake the city with their creations and talents.

Cordes became the city of all art forms.

One of the biggest and most famous festivals of medieval times is the one annually held in Cordes – The Grand Fauconnier.

A whole city returns to the Middle Ages and there’s a lot of things to see and do there in the middle of July each year.

For music enthusiasts, there’s Musique sur Ciel – that covers all from baroque to the works of young composers.

They certainly didn’t forget people who are in love with the famous French cuisine.

Cordes sur Ciel also has some gastronomic festivals during the year that you can visit:

In April, it is the Fête des Responchons

June has a celebration of Cordes culinary specialty at the Feast of the Croquant.

In September is the Fête de la Bonne Vie (the good life festival).

All in all – Cordes is a place that offers a lot of fun things from themed festivals to great music and unique performances.

Cordes also has a range of walking trails, traveling by bike tours for both beginners and experts, extremely tasteful restaurants and the most important thing for a genuine vacation – peaceful atmosphere.

A tips is La Maison Bakéa.

Here you live in a building from the 13th century.

For a perfect getaway to the medieval time and this beautiful and interesting city in France, take a look at the complete offer of hotels in Cordes sur Ciel.