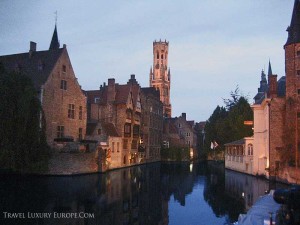 Bruges is a marvellous city, beautifully romantic, with a relaxing atmosphere.

The canal-side setting of the historic centre has given rise to comparisons to Amsterdam, though Bruges is definitely a quieter alternative to the Dutch capital.

Like the rest of Belgium, Bruges is known for its mussels, chocolate, lace, and beer and there are plenty of places to shop for these around the city.

This combined with the nice environment makes it really nice to come here.

The historic centre of Bruges is where visitors spend the majority of their time, and with its compact size it’s easy to get around on foot or by bicycle.

The main tourist areas are largely vehicle-free, making it even more pleasant to explore the city’s streets.

The historic centre was declared a UNESCO World Heritage Site back in 2000 in recognition of its many beautifully preserved medieval buildings.

Among these the best known is the Belfry of Bruges which was built on the main market square in 1240 though largely destroyed by fire then rebuilt again in 1280.

The Belfry is one of Bruges’ most popular attractions because you can climb (for a fee) the 366 steps to the top and enjoy fabulous views over the historic heart of the city.

Other notable medieval architecture includes The Beguinage, City Hall, and the Basilica of the Holy Blood, plus you’ll find many attractive little bridges crossing the canals.

The windmills are another attractive feature of Bruges. 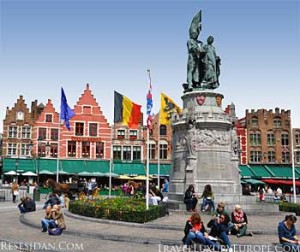 There are many cafes and restaurants in the historic centre with the most popular on the main square, ‘Grote Markt’, where you can sit and watch the world go by.

You can have a very contented stay at the four star hotel Jan Brito, a hotel near the city centre and just 500 metres from the popular Market Square. 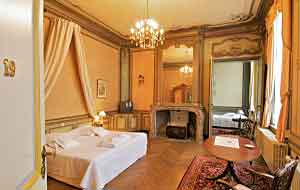 They have comfortable beds, good breakfast, nice rooms, and the friendly staff provide great levels of service. The hotel is a beautiful old building with elegant period-style furnishings and modern touches that make your stay a pleasant one. And it has free wireless Internet.

Parking is readily available in the secure car park just about 100 metres from the hotel.

There are many other hotels as well worth having a look at.

With its reputation for chocolate you won’t be surprised to hear there is a chocolate museum in Bruges. Detailed insight into the history of chocolate and its impact on Belgium and Europe can be read on the Choco-Story page.

The museum is an interesting place to visit, but frankly you can get the chocolate experience in numerous places around Bruges as most chocolate shops make their own chocolate.

The beer brewery “De Halve Maan” is another attraction, with a museum and opportunities to sample the beers, and on that subject don’t miss the large Beer Wall.

Things to do in Bruges