Athens – Home of the Acropolis and Capital of Greece

If you appreciate history and culture then Athens is an amazing city!

It is one of the oldest cities in the world; once a powerful city-state, and always a centre for arts, culture, learning, and philosophy.

It is considered by many to be the birthplace of democracy, and the cradle of the Western civilization.

Today it is a modern and cosmopolitan city with a very vibrant and bustling atmosphere, but what most tourists come to see are the awe inspiring remains of Classical Athens – the Acropolis.

Athens International Airport is about 35 kilometres (22 miles) outside of the city, to the east. It’s a large and busy airport with flights coming here from all over the world.

The airport is well connected to the city, with the metro, suburban rail, and buses, going between the two, or there are always taxis available if you want a door to door service. 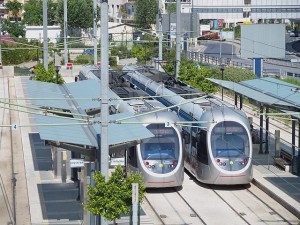 Getting Around in Athens

Athens is the capital and largest city of Greece today, and with its 3.7 million residents in the metropolitan area it is a busy place, full of traffic, and noise.

Efforts have been made to improve the air quality in the city, and the best way to get around is not by car but by public transit.

Between the Metro, tram, and the electric railway it’s easy to get to most parts of the city.

Many visitors think of Athens as being a hot and sunny place and while this is true in the summer, winters are cooler in comparison.

It is a very sunny city though, averaging close to 2,800 hours of sunshine per year and the sunniest months are from May to September.

If you don’t like the heat you should not visit in the middle of summer. The average high in July and August is just over 33 C but if you’re right in the city it can feel hotter than this.

You’re better off visiting early or late summer, such as May or September. From October it gets a little rainier though remains warm. The coolest month is January when the average high is 12.5C.

You can find over 230 hotels here, so you have many to choose from. These are scattered all across the city though, so when choosing a hotel check where it is located in comparison to the attractions you want to visit. 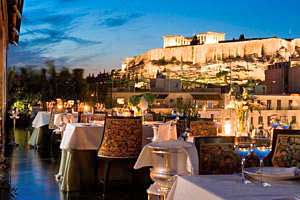 If you would like to stay in 5 star accommodation there are 25 5-star hotels in the city and location-wise they don’t come much better than The Royal Olympic Hotel.

It is just a short walk from the Acropolis, and rooms actually overlook Zeus’s Temple.

The rooftop restaurant (picture above) is a fabulous place to enjoy a Greek meal and amazing views.

A full overview of all hotels in Athens here >>

Some of the city’s famous attractions

There’s no doubt that it’s the ancient attractions most tourists come to see, but this isn’t all that this old city has to offer.

There’s a fabulous World Heritage listed site from medieval times, for example, the Daphni Monastery, and some excellent museums too.

The Acropolis is impressive for so many reasons – it is perched high above the city on top of one of the seven historic hills, so you can see it from far and wide.

The ancient citadel is impressive in size too – not until you get right up close to the Parthenon can you really appreciate just how large this structure is.

Then there’s the age – it’s incredible that most of the structures have survived relatively intact for so long. The main structures date from the 5th century BC after all, with their construction overseen by Pericles.

Of course, the Acropolis has undergone restoration work – it has not survived as intact as you see it today without any intervention.

A restoration project has been under way since the 1970s and all is now near completion, making this a great time to visit. 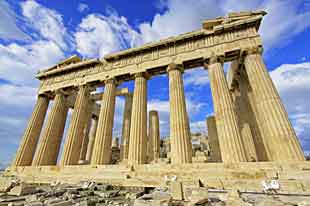 There are 21 remains within the Acropolis altogether including several odeons and sanctuaries. The Odeon of Herodes Atticus is an amphitheatre that originally had a wooden roof.

Today the theatre is well preserved and is used as a venue for concerts, operas and plays. The Theatre of Dionysus has not faired as well. It is in ruins but is important, all the same, as one of the earliest preserved in Athens.

Another UNESCO World Heritage Site is the Daphni Monastery. It is a Byzantine monastery, constructed during medieval times, and stands about 11 kilometres from city downtown.

The monastery was built in the 11th century and stands on the Sacred Way – the ancient road that led from Athens to Eleusis. There is a main church with classic Byzantine architecture which inside holds the best preserved complex of mosaics from th early Comnenian period (around the year 1100). 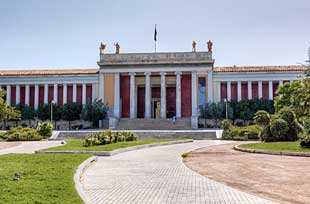 Considering Athens is such an important city in the history of Western civilisation it’s not surprising that it has some of the world’s best museums.

The National Archaeological Museum is the largest of its kind in Greece and one of the most important in the world.

As expected it has an amazing and extensive collection of Greek antiquities, but it also has artefacts from all around the world, covering a period of more than 5,000 years.

The Acropolis Museum should be seen in conjunction with a visit to the Acropolis. It is simply full of artefacts found on the Acropolis and was built with the intention of housing every item found there.

Things to do in Athens